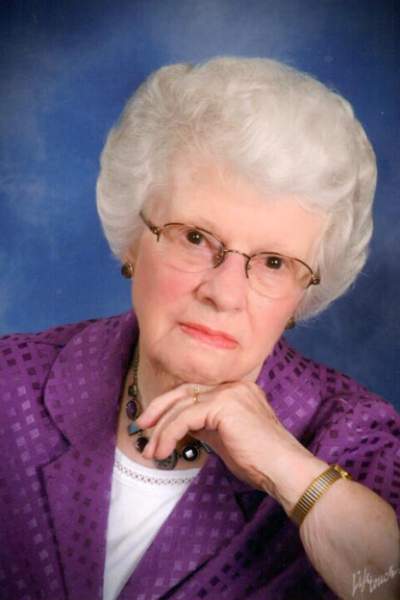 Evelyn Marion Audette, age 96, of Crookston, MN passed away peacefully with her family by her side on Sunday, September 17, 2017 at the Villa St. Vincent in Crookston, MN.

Evelyn was born in Crookston, MN on January 22, 1921 to Philias and Caroline (Dufault) Brule. She was raised on a farm near Gentilly, MN.

Evelyn attended Kripple Kreek School through 8th grade. She later attended the Victorian School of Beauty in Grand Forks, ND, graduating in 1938. She was employed part-time at the Powder Puff Shop and Dikel’s shop in Crookston, MN.

On November 6, 1939 Evelyn married Eldrick Audette at St. Peter’s Catholic Church in Gentilly, MN. They lived in several different areas, wherever work was available. From 1942-45 they lived in St. Paul, MN, where Eldrick worked at Huot Mfg.

In October of 1978 Eldrick and Evelyn took one month off of work and toured many states in their motorhome, going down as far as Key West, FL. This was their last trip together.

Her yard and flowers were very important to Evelyn.  So was having all of her family over during the Christmas holidays; the last time being in 1994, when there were 45-50 family members. After that year the house could hold no more, so she had to give that up.

Evelyn took many bus tours with friends and many trips with family to special occasions. Playing cards and bowling with friends were always special times in her life.

Evelyn will always be remembered for her gentle, quiet spirit, which brought out the best in each person she touched.

There will be a visitation from 5-7 p.m. with a prayer service at 7 p.m. on Thursday, September 21, 2017 at the Stenshoel-Houske Funeral Home in Crookston, MN. There will be a funeral mass at 2:00 p.m. with a visitation one hour prior to service on Friday, September 22, 2017 at the Cathedral of the Immaculate Conception in Crookston, MN. Interment will be at St. Peter’s Catholic Cemetery in Gentilly, MN.

Click to download / open
To order memorial trees or send flowers to the family in memory of Evelyn Audette, please visit our flower store.
Open