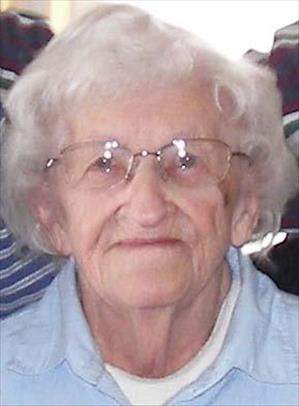 Elizabeth "Betty" Cassavant, 94, of Red Lake Falls, Minnesota died peacefully early Saturday morning, August 29, 2015 at RiverView Hospital in Crookston after a long battle with cancer. Betty was born on July 4, 1921 in Plummer, Minnesota to Charles and Anna (Mares) Schmidt. Betty married Lawrence Cassavant on November 2, 1941 in San Francisco, California prior to his serving in the US Army. They returned home to Red Lake Falls and farmed until their retirement. Lawrence passed away in 1997. They have three children: Bill (Jamie) Cassavant from Red Lake Falls, Linda (Jerry Ward) Cassavant from Yulee, Florida, and Brent (Jackie) Cassavant from Red Lake Falls. Family was an important part of Betty's life. She has 8 grandchildren: Shawn (Bill) Donarski, Corey (Jill) Cassavant, Matthew (Rochele) Knudsen, Courtney Knudsen, Bridget Reinke and Jennifer (Marty) Howes, Corey Shockley and Dusty Shockley. 12 great-grandchildren: Mikayla (Tony Bach) Brazier, Brandon Brazier, Austin Cassavant, Alivia Cassavant, Taylor Knudsen, Aubrey Knudsen, Dalton Reinke, Gavin Reinke, Silas Reinke, Nia Reinke, Catherine Thompson and Gage Thompson. 1 great-great grandson: Garrett Bach. Betty was preceded in death by her husband, Lawrence, her parents Charles Sr. and Anna Schmidt, a sister, Clarissa Pederson and brother-in-law Bill, brothers Charles Schmidt Jr. and sister-in-law Orrie, and Bylo Schmidt and sister-in-law Clarice. Although she was tiny and frail, she gave us all such courage and hope and reminded us of the preciousness of life. She loved gardening, canning, baking bread, reading novels and playing music. She will be missed but she is with us still in the hearts of all her family and friends. Betty requested not to send flowers so the family requests that donations be made to RiverView Foundation in her name. A light lunch will be served at Stenshoel-Houske Funeral Home prior to the internment at the Dorothy Cemetery.

To order memorial trees or send flowers to the family in memory of Elizabeth Cassavant, please visit our flower store.