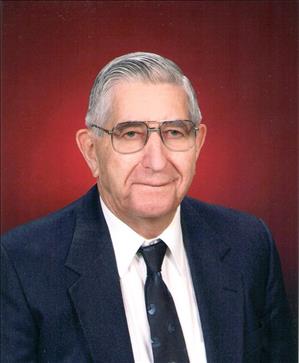 Ed was born at the family farm outside of Staples, MN, on October 13, 1924. He was the youngest of seven children born to Steve and Clara (Knosalla) Kurpius, first descendants of Polish immigrants to America in the late 1800's.

Edward was baptized into the Catholic faith at the Sacred Heart Church in Staples and spent his pre-school years in Todd County.

His family moved to a farm near Caledonia, ND, in 1929. He attended grades 1-7 there and was confirmed at the St. Rose of Lima Catholic Church in Hillsboro, ND. In the spring of 1937 a move was made to the Lockhart area. There Edward graduated from the eighth grade. In 1938 the family moved onto a nearby farmstead. Due to this relocation Ed transferred to Beltrami to attend high school while assisting his father on the farm.

On October 2, 1946, he was united in marriage to Marjorie Bremer at the St. Joseph's parsonage in Ada. The couple moved onto the family farm in Pleasant View township that had been homesteaded by his new wife's grandparents. There they began a partnership of raising small grains and Holstein dairy cattle. It was here where they welcomed their two daughters, Connie and Mary Jane. After the birth of his second baby girl, Ed often said that he was going to order a rural mailbox sign that read "Edward Kurpius and Daughters!"

During the years on the farm the couple served as leaders for the Pleasant View 4-H Club and were active in activities at St. Joseph's Catholic Church in Ada. They were also non-stop supporters of their daughters' various school, church, and community activities.

In 1969 Ed retired from farming and turned his attention to business. He took over the ownership of the Texaco station in Ada where he served the community for fifteen years. In 1984 the doors of Kurpius Oil closed for the final time, and some well-deserved years of retirement and travel ensued. The couple joined a motor home group and traveled to all 48 of the continental United States, Mexico, and several provinces in Canada.

After fifty-six years of marriage Edward lost his wife, Marjorie, to cancer in December of 2002. It was during those twelve years of fighting the loathsome disease that his family was witness to his steadfast faith and devotion. They learned just how strong one can be when life hands you trials.

In the fall of 2003 Edward left Ada and moved to the Summerfield Apartments in Crookston to be closer to his family. It was here that we were reminded that God doesn't close doors without opening windows! At the apartments Ed met Delores Smith, and as they say, "The rest is history!" The couple were married at the Cathedral of the Immaculate Conception in Crookston on June 14, 2004, and later honeymooned on the island of Maui. Edward always said that prior to his second marriage he had asked God for five more years - the Almighty granted him ten!

Although Ed officially retired from active farming in 1969, he was a true" blackland farmer" to the end. Prior to his death he was dreaming about ordering fertilizer for spring planting! He loved the feel of a handful of fresh black dirt between his fingers, insisted on planting perfectly straight rows - no angling off to the left or right, and rejoiced silently when his crops began to germinate and spring up through the rich Red River Valley soil. He thought there was nothing more beautiful than a field of blooming blue flax or the waves of purple and lavender alfalfa blossoms blowing in the summer breeze.

He enjoyed standing in the farmyard and calling for his herd of black and white Holstein cows to come slowly promenading in single file formation to the barn for milking time. The strong hands that did all the mechanical work on various pieces of farm equipment would also gently hold a tiny kitten or help a wobbly newborn calf adjust to its legs for the first time.

In 1978 when Paul Harvey wrote, "So God Made a Farmer," he must have known Edward. The opening passage states, "And on the eighth day God looked down on his planned paradise and said,' I need a caretaker.' So God made a farmer."

Edward possessed the quiet strength of a family patriarch and epitomized the image of a true partner in marriage. He was a strong and supportive father, grandfather, and great-grandfather, a truly selfless family man. We never stopped learning from him.

Edward will be remembered for his gentleness and compassion, his strong work ethic and integrity, and a lifetime firmly rooted in faith. We will miss him dearly. "Well-done, good and faithful servant." Matthew 25:21. May he rejoice forever in the Spirit of the Lord!

Visitation will be held at the Stenshoel Funeral Home on Friday, March 27 from 5-7PM. The prayer service and rosary will follow at 7:00.

The Mass of Christian Burial will be on Saturday at 10:30AM at the Cathedral of the Immaculate Conception in Crookston with internment to follow at the Ada Cemetery. Online registry: www.stenshoelhouske.com

Prayer service and sharing of memories at 7PM.

To order memorial trees or send flowers to the family in memory of Edward Kurpius, please visit our flower store.