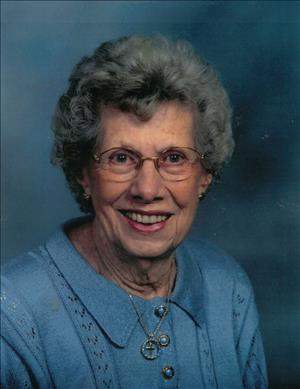 Edna Gladys Bendickson, 95, a lifelong resident of Crookston, MN, died Tuesday, January 17, 2017, at the RiverView Care Center in Crookston, with loving family at her bedside. Edna was born in Crookston on October 30, 1921, one of 4 children of the union of Oscar and Augusta (Ladhoff) Anderson. She was baptized and confirmed in the Lutheran faith and graduated from Central High School. After graduation she moved to Washington, D.C. where she worked as a secretary for one of the government agencies. Upon her return to Crookston, Edna was employed by her uncle, John Ladhoff, at his business called Cab 17. It was while working there that she met and fell in love with one of the drivers, Carroll Bendickson. Carroll was called to active duty with the US Army during WWII and stationed at Ft. Knox, KY. Edna joined him there and they were united in marriage on June 5, 1943. She came back to Crookston and began working as an operator for the Northwestern Bell Telephone Company. After his honorable discharge, Carroll rejoined Edna and together, they began raising their family, which over the years grew to include 4 children: David, Carol, Sandy, and Kay. While Edna managed their busy household, Carroll began working for Maves Optical. In 1950 the family moved to St. Cloud, MN where he worked for Lantz Optical. In 1954 they returned and he resumed working for Russell Maves. During the late 1960's, and after all the kids were in school, Edna began working at St. Francis Hospital in the Medical Records Department. She was later employed at Northwestern Clinic taking care of medical records and as switchboard operator. Sadly, their daughter, Carol Morris, passed away on November 15, 1986. Edna retired in 1989 so that she and Carroll could enjoy their golden years together, which they did. Life was saddened once again by the passing of Carroll on July 8, 1996 and son, David, on January 11, 2014. In semi-retirement Edna began working for Crookston Job Services, where they were able to keep her busy with part time employment. In 2009, at the age of 88, she finally decided it was time to step aside and turn things over to the young people. In June of 2011 Edna became a resident of the RiverView Care Center, where the kind and caring staff became her extended family, and for which her daughters and grandchildren were very grateful.

Edna was a devoted member of St. Paul's Lutheran Church; very active in WELCA, co-chair of the work and serve group, taught in the Sunday school and Bible school programs for many years, and served on the church council. If it could be called a hobby, then her hobby was making cakes for any and all occasions for family and friends. She loved to spend time with her family, visit with friends, and go road-tripping with her sister and best friend, Helen. May God richly bless the memory of Edna Gladys Bendickson.

The funeral service for Edna will be held at 2:30 p.m., Saturday, January 21, 2017, at St. Paul's Lutheran Church in Crookston with The Rev. Bill Reck, officiating. Visitation will be for one hour before the funeral. Interment will take place in the Oakdale Cemetery, Crookston, in the spring.

A graveside service will be held later in the spring.

To order memorial trees or send flowers to the family in memory of Edna Bendickson, please visit our flower store.