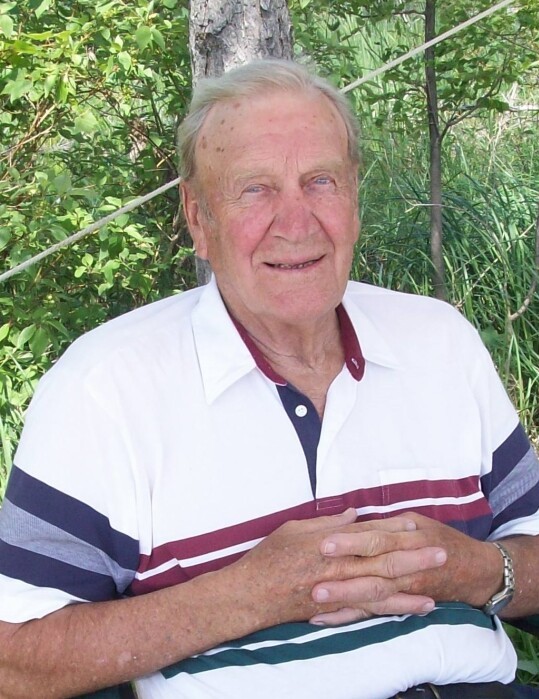 Earl was born on April 14, 1928 at the Fisher, MN homestead of his parents Martin and Ida (Heydt) Wagner. He was baptized at the Trinity Lutheran Church on May 13, 1928 and confirmed there on March 29, 1942. Earl attended school and graduated from Fisher High School. He attended North Dakota State University in Fargo for a short time before enlisting in the US Army National Guard. Earl farmed with his brothers Lloyd and Eugene for twenty five years, at which time they each started farming with their own sons and grandsons.

As a teen-ager, Earl was active in Walther League, a youth ministry group within the Missouri Synod Lutheran Church. Through the group’s activities he met Elizabeth Illeana Fladeland of Red Lake Falls, MN. Their friendship, while it remained lifelong, became a deep and abiding love, and they were united in marriage on May 26, 1951 at St. John’s Lutheran Church in Red Lake Falls. After the wedding, they traveled to Ft. Benning, near Columbus, GA, where Earl was stationed. After his honorable discharge, the couple settled on a farm in Lowell Township (near Fisher) and together raised their six children in a loving, Christian home.

Farming became a partnership between Elizabeth and Earl, sharing in the duties it took to maintain a successful operation. Earl was an active and devoted member of Trinity Lutheran Church in Fisher, served on the MN North District Council of the LCMS, and the Board of the Lutheran Island Camp. He was also a former president of the Crookston Farm Bureau.

Love for travel took Earl, Elizabeth, and their family to many places throughout the United States. After retiring from farming in 1990 they turned over the farming operation to their son, Robin. Earl and Elizabeth were able to enjoy spending winters in Bonita Springs, Florida for almost 25 years. In October of 2018 they moved from their home on the farm to East Grand Forks. Elizabeth passed away on January 3, 2019.

Earl is lovingly survived by six children and spouses: Robin and Lisa Wagner of Fisher, MN, Andrew and Christina Wagner of Salt Lake City, UT, Holly and Bruce Blocker of Bagley, MN, Cheri and Kevin Knop of Monticello, MN, Sanna and Stephen Hett of Farmington, MN, and Lisa and Dale Johnson of New Prague, MN; 19 grandchildren; and 17 great-grandchildren.  He also leaves two sisters and a brother-in-law, Irene Ross, of Crookston, MN and Betty Lou and Marlin Radi; brother and sister-in-law, Eugene and Gladys Wagner of Fisher; sister-in-law, Harriet Wagner of Fisher; and from Elizabeth’s side of the family, brother-in-law, Terry Fladeland and his wife, Jeri, of Hatton, ND; and many nieces, nephews, extended family, and friends.

In addition to Elizabeth, his beloved wife of more than 67 years, Earl was preceded in death by his parents, Martin and Ida Wagner; brothers, sisters, and spouses: Lloyd Wagner, Evelyn and Noel Wentzel, Florence and Warner Wentzel, Delbert Wagner, Rosemary and Gene Morken, and Amos Ross; and from Elizabeth’s family, parents-in-law, Andrew and Pauline Fladeland; brothers-in-law and sisters-in-law: John and Teddy Fladeland, Julie and Herb Rutherford, and Ronald Beiswenger. Blessed be the memory of Earl Kenneth Wagner

The funeral service for Earl Wagner will be held at 11:00 a.m., Saturday, November 14, 2020, at the Trinity Lutheran Church in Fisher, MN with The Rev. Douglas S. Thompson, officiating. Visitation will be at the Church on Saturday from 9-11:00. Interment will follow in the Greenwood Cemetery at Fisher. Military Honors will be provided by Fisher American Legion Post #242 and the Minnesota National Guard of Moorhead. Memorials may be given in memory of Earl to Lutheran Island Camp, 45011 230th Street, Henning, MN 56551 or the Trinity Lutheran Church in Fisher. Due to COVID-19 restrictions the family asks that all attending wear masks and social distancing will be observed for up to 150. The service will be livestreamed and can be viewed by logging on to Facebook and using search to go to TLCFISHER up to 10 minutes before the start of the funeral for viewing the service.

To order memorial trees or send flowers to the family in memory of Earl Wagner, please visit our flower store.