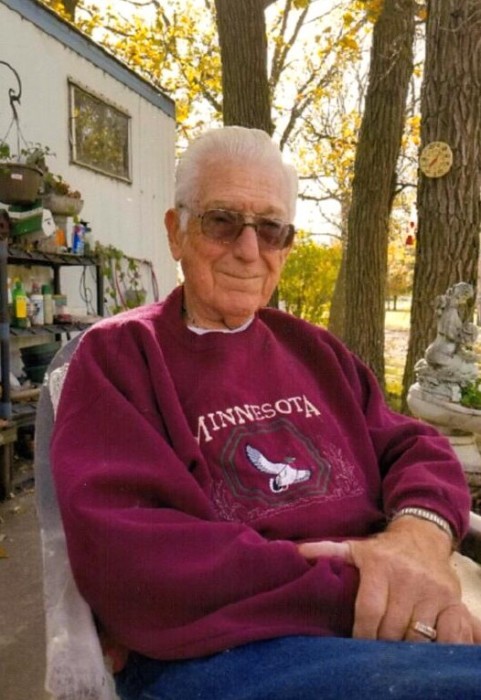 Dwane Alvin Palmer, age 90, passed away peacefully at home, with family by his side, on January 16th, 2018.

Dwane was born September 30th, 1927 to Alvin and Martha Palmer in Crookston MN.  He graduated from Cathedral High School in Crookston.  Starting in the 8th Grade up until he entered the Army, he worked at the Grand Theater and as a night express agent for the railroad.   He joined the Army in February of 1946, at the age of 17. He was stationed at Camp Crowder, MO where he became a medic and then went to school to become a surgical technician.  He served in the US Army 156th General Hospital and primarily worked on the chest surgery and back surgery units.  The majority of the patients he served were wounded soldiers from the war, who were in long term recovery requiring multiple surgeries.  When not in surgery, Dwane would work in the wards. At Fitzsimmons (Army Hospital) there were 11 surgical wards—each with 110 beds. There he would administer mostly pain medication to patients coming out of surgery.

In 1948 he separated from the service while at Lorrey Field outside of Denver, Colorado.  He went back to Crookston where he worked for the Park Department.  While working at the sports arena he met Juneth Sather, whom he married on June 6th 1950.  Dwane then began an apprenticeship as a plasterer.  Three years later he became a journeyman plasterer, a field in which he worked for 40 years.  When his son Kim was old enough, (Kim apprenticed under his Dad) they worked together in Beulah, ND for 3 years at a gasification plant.  Following that, he went to work for a general contractor in Arizona with his son Marc.

Dwane had a great love for life.  He enjoyed spending his summers with his wife and children at Maple Lake where he raised pigs and geese.  Every year he grew a beautiful garden with fresh vegetables and flowers he shared with many friends and family.  He loved his pets Tommy and Taco.  He also had a love for travel, with a goal of seeing all continental US states with his family.

He is preceded in death by his beautiful wife of 66 years, Juneth, parents Alvin and Martha Palmer, mother and father-in-law Oscar and Marvel Sather, sons, Kim and Daniel Palmer, granddaughter Tiffany Glass, and brother-in-law Roy Bakken.

To order memorial trees or send flowers to the family in memory of Dwane Palmer, please visit our flower store.