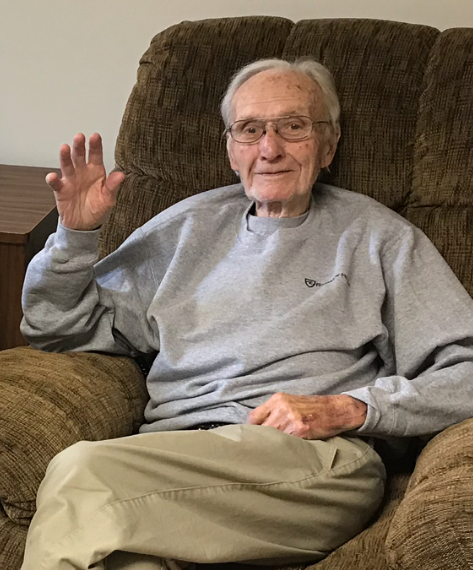 Douglas Alexander Weaver, age 99, of Crookston, MN, passed away on Sunday, November 17, 2019, at the Villa St. Vincent in Crookston, MN.

Douglas was born on January 10, 1920, in Devils Lake, ND, the son of the late Harold and Elsie (Leach) Weaver.  He was raised in Devils Lake and graduated from Devils Lake High School.  Afterwards, he travelled to California playing saxophone and clarinet in various bands and working at Lockheed with the war effort.  He was married to Dorothy Stefonowicz on September 1, 1941, in Las Vegas, NV.  Douglas enlisted in the United States Navy and served from 1944-1946 during World War II.  When he returned from the war, he and Dorothy made their home in Devils Lake where he worked for the local Chevrolet garage before joining the Great Northern Railroad in 1953 as a switchman.  He transferred to Crookston in 1957 and stayed there until his retirement in 1981.  He was a longtime member of Wesley United Methodist Church, the Crookston Eagle’s Club, VFW Post 1902, and American Legion Post 20, and played in the American Legion 9th District Band.

Visitation:  One Hour Before the Service.

To order memorial trees or send flowers to the family in memory of Douglas Weaver, please visit our flower store.