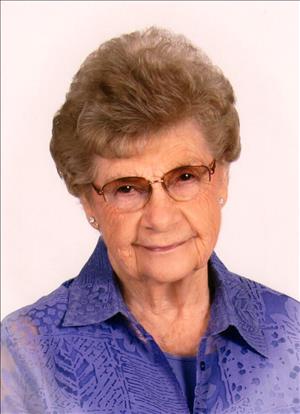 Doris Alma Reitmeier, 96, of Crookston, MN, died Wednesday, July 27, 2016, in RiverView Health, Crookston, with her loving family at her side. Doris was born in Fisher, MN on June 17, 1920, the thirteenth of fourteen children of the union of Ferd and Minnie (Wentzel) Ross, and was baptized and confirmed at the Trinity Lutheran Church. She attended school in Fisher, where she was affectionately given the nickname "Sugarbeet" and graduated as a proud member of the class of 1938. Doris was united in marriage to Clarence Ervin Reitmeier on November 14, 1940 at the home of her parents. Scripture used for their ceremony included the verse, "I will never leave thee or forsake thee", a creed they embraced throughout seventy-three years of marriage. Doris and Clarence called their farm in Fanny Township home and is where they raised five children: Jeanette, Elaine, Carol, Connie and Jim. Very sadly, their son, Calvin, died just a few days after birth in 1945. While the kids were growing up, showing horses became one of their passions; and while it may not necessarily have been Doris's, her pride in their success was without measure. Doris and Clarence created a home filled with love and a deep and abiding faith. Her family always came first, and as more generations were added she continued selflessly and humbly her life's work of nurturing, whether in her role as wife, mother and grandmother, or more recently as great-grandmother. Their home was the place where everyone wanted to be and Doris always made sure everyone had a chair, and a bed if need be. Sunday dinners, and holidays were celebrated with such joy that no one wanted to miss a minute of the fun. She loved to cook, and her family, with laughter and affection, recalled how her roasts were always "well-done", even though she rarely, if ever, had a bite herself. Doris was a devoted member of Our Savior's Lutheran Church, and taught both Sunday school and vacation bible school for many years. She was also a member of the Homemakers Club, and she and Clarence bowled in couples leagues for many years with several dear friends. Playing cards was one of her abiding passions and smear and gin rummy were her favorite games. Doris seemed to always win, and when playing with her family the grandkids would have friendly arguments over who would get to be grandma's partner. As the years went by things began to slow down a bit, and the family was deeply saddened by the passing of Clarence on April 11, 2014. Knowing that Doris and Clarence are now together again gives great comfort and their memories will be forever cherished. Grateful to have shared in her life are her 5 children and their spouses: Jeanette "Jan" and Dick Hanson of West Chicago, IL, Elaine and Corky Miller, Carol and Tom Hunt, Connie and Dan Cooley, and Jim and Robin Reitmeier all of Crookston; 11 grandchildren: Lori (Alex) Munoz, Lisa (Jim) Gardner, Bryan (Denise) Hanson, Jessica McKenna, Orion Miller, Katie (Andy) Fee, Clarence "Carl" (Dawn) Hunt, Sarah Cooley (fiance' Kevin Rivera), Kristi (Erik) Griffin, Jackie (Brandon) Otway, and Kelly Reitmeier (fiancé' Michael Beiswenger); and 20 great-grandchildren: Amanda (Conor) Grealsh, Cristie and Alexandria Munoz, Emily and Eddie Forsythe, Jon, Hannah, and Quyn Gardner, James and Cathryn Hanson, Hannah Cook, Hayley, Kylie, Nicole and Daniele McKenna, Addie and Kelby Fee, Brynlee Hunt, Lily Griffin and Noah Otway. It was always Doris's wish that her grandchildren and great-grandchildren learn the old German prayer "Now I lay me down to sleep", and they are doing just so to honor her. Doris is also survived by many nieces and nephews and other relatives. In addition to her beloved husband, Clarence, and son, Calvin, Doris is preceded in death by her parents, Ferd and Minnie Ross; and all 13 of her siblings: Clara Ross, Arthur (Elizabeth) Ross, Martha (Amos) Wagner, Laura (Henry) Beiswenger, Ida (William) Beiswenger, Walter (Bertha) Ross, Olga (Herb) Wagner, Erma (Ervin) Bauer, Edna (Arne) Hanson, Ella (Ervin) Maruska, Minna (Alfred) Johnstad, Elmer (Ruth) Ross, and Ferd (Wanetta) Ross. May God bless the memory of Doris Alma Reitmeier. The funeral service for Doris Reitmeier will be held at 10:30am, Tuesday, August 2, 2016, at Our Savior's Lutheran Church in Crookston with The Rev. Steve Bohler, officiating. Visitation will be at the Stenshoel-Houske Funeral Home on Monday from 5-7:00pm, with a 7:00pm prayer service, and also at the church for one prior to the funeral. Interment will be in the Oakdale Cemetery, Crookston.

To order memorial trees or send flowers to the family in memory of Doris Reitmeier, please visit our flower store.