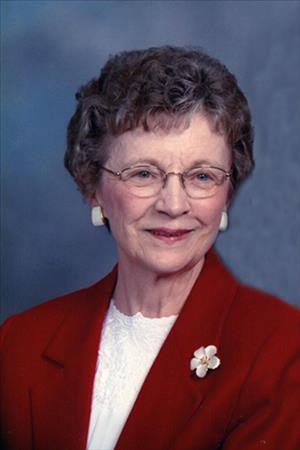 Doris Claire Matzke, 89, of Crookston, MN, passed away on Monday, September 5, 2016. Her kind and loving heart gave out after a long life of service. Doris and her twin sister, Edith, were born on August 2, 1927, in St. Paul, MN, to Clarence and Edith Amundson. The talented twins spent their summers throughout their teens tap dancing at county fairs throughout the upper midwest. Doris graduated from Monroe High School in St. Paul in 1944. She met the love of her life, Bill Matzke, at Luther League, and while he served in the U.S. Navy during WWII, Doris attended Macalester College from 1944-46. They were married on September 13, 1947 in St. Paul, and moved to Crookston in 1948. Two children were born to their union, Steven and Marjorie. Doris and Bill were lifelong, active and involved residents of Crookston, and were married for 64 years, until Bill's passing in 2012. Doris was a longtime and highly skilled executive secretary, who worked at the University of Minnesota-Crookston from its inception until her retirement in 1992. She and Bill were very devoted and involved members of St. Paul's Lutheran Church. Her "church family" was very important to her, and she served them in many ways, including as choir director, Bible study leader, and president of the Ladies Aid. Both Bill and Doris were instrumental in bringing the Civic Music League Allied Concert Series to Crookston in the 1950's, and both were enthusiastic participants in numerous Crookston Community Theater productions. Though Bill was typically the one in the spotlight, Doris occasionally overcame her modest nature to strap on her tap shoes, and helped out doing everything from makeup to programs. The couple spent countless hours entertaining local nursing home residents. Doris is survived by her son, Steven Matzke, of Crookston, MN, and daughter, Marjorie Baumrucker, of Cottage Grove, MN; 2 grandsons, David Baumrucker of Missoula, MT and Michael Baumrucker of Cottage Grove; and several nieces and nephews. She was preceded in death by her husband, Bill; her parents, Clarence and Edith; and her identical twin sister, Edith. The memorial service for Doris Matzke will be held at 2:00 p.m., Friday, September 9, 2016, in St. Paul's Lutheran Church, Crookston, MN, with The Rev. Bill Reck, officiating. Visitation with Doris' family will be at the church from 12 Noon until the time of the service. Inurnment will be in the Ft. Snelling National Cemetery, Minneapolis, MN. In lieu of flowers memorials may be given to the church or charity of the donor's choice.

Visitation from Noon until the time of the service.

To order memorial trees or send flowers to the family in memory of Doris Matzke, please visit our flower store.