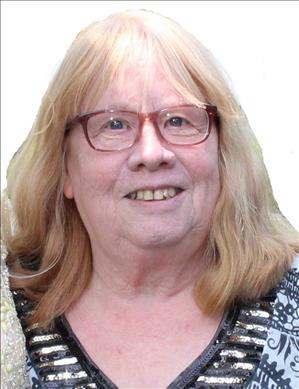 Donna was born on February 23, 1948, one of six children of the union of Arnold and Bernice (Ramstad) Hendricks. They lived on the family farm near Fertile, MN and later moved to Winger, MN then on to McIntosh, MN. Donna graduated from McIntosh High School with the Class of 1966. In November of 1966 she celebrated the birth of her daughter, Missy. Donna was united in marriage to Ronald Hamlin in June of 1970. The family moved to Crookston and welcomed daughter, RoseAnn, in October of 1971. Once both girls entered school, Donna began working in the Crookston School system in 1979. She began as the "recess lady" and over the years her role expanded to include secretarial and special education paraprofessional duties. Since she didn't drive, Donna will be fondly remembered as someone always seen walking from her home near downtown Crookston to the schools. In May of 2011 she retired after 32 years of dedicated service to Crookston Public Schools, and a month later moved to Fargo.

Family meant everything to Donna, and she simply glowed when in the company of her daughters, grandkids, and great-grandkids. She looked forward to time spent with her sisters and twin brother, and enjoying the fun shared during their excursions and adventures. As a doting aunt to her nieces and nephews, she became the keeper of family memories and the "glue" that kept everyone together.

Donna is survived by her 2 beloved daughters and sons-in-law, Missy and Todd Janssen of Crookston, and RoseAnn and Darin Ulness of Moorhead, MN; her 3 grandchildren and 2 great-grandchildren: Megan (Craig) Hruby and their children of Jimmy and Eden of Red Lake Falls, MN, Derek Janssen and his fiancé, Katlyn Rajchel, of Fisher, MN, and Allison Ulness of Moorhead, MN; 4 siblings: Linda Barstad of McIntosh, MN, twin-brother, Dennis Hendricks of Tioga, ND, Debbie (Chet) Nelson of Fosston, MN, and Sheila (Steve) Vigoren of Burnsville, MN; 11 very special nieces and nephews; and several cousins and other relatives. She was preceded in death by her parents, Arnold and Bernice; sister, Lorie Hendricks; brother-in-law, Gene Barstad; sister-in-law, Cindy Hendricks; and niece, Shannon Vigoren Bonicatto. May God richly bless Donna's memory.

A Memorial Service for Donna Marie Hamlin will be held at 1:00 p.m., Friday, February 10, 2017, at the Stenshoel-Houske Funeral Home in Crookston, MN with The Rev. Michelle Miller, officiating. Visitation with her family will be at the funeral home on Thursday from 5-7:00 p.m., with a 7:00 p.m. prayer service, and for one hour prior to the funeral Friday. Inurnment will be in the Rindal Cemetery, rural Fertile, MN.

To order memorial trees or send flowers to the family in memory of Donna Hamlin, please visit our flower store.