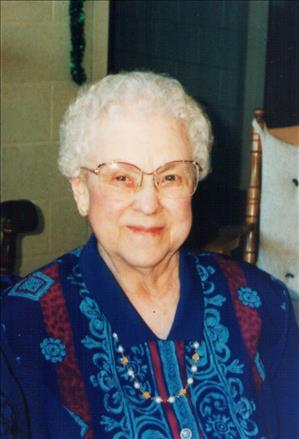 Delia Lanctot, 106, of Crookston, formerly of Gentilly, died Thursday, May 7, 2015, at Villa St. Vincent. Delia Rose Marie Brule was born on September 23, 1908 in Gentilly Township, MN, the daughter of Philias and Caroline (Dufault) Brule. She was baptized and confirmed at St. Peter's Catholic Church in Gentilly. Delia attended Kripple Kreek country school near Gentilly, through the eighth grade. On May 21, 1929, Delia married Eddie Lanctot at St. Peter's Catholic Church. Delia and Eddie lived on a farm in Crookston Township before moving to Gentilly in October of 1937 with their three children. There, they owned and operated a Hartz store for 12 years. During that time, Eddie also managed the Gentilly Dairy Association and Delia assisted him with the bookkeeping. After Eddie's sudden death in 1951, and the death of her father in 1953, Delia asked her mother to live with her. During this time, Delia took part in an adult education typing class at Central High School, obtained a certificate in filing, bookkeeping and accounting, by correspondence from Seattle, and learned how to drive. Delia took care of her mother for 24 years, before Caroline moved to the Villa St. Vincent Nursing Home in 1977. After living in Gentilly for 64 years, Delia moved to the Villa Summit Apartments on July 2, 2001, and in 2005, to Villa St. Vincent Nursing Home, where she has since resided. Delia enjoyed gardening, canning vegetables, baking, flowers, crocheting, and listening to music. Most of all, she enjoyed the company of family and friends, and playing cards with them. She served two terms as president of St. Anne's Sodality, was a member of the National Catholic Society since 1940, and also belonged to the Gentilly Senior Citizens Club. She will be sadly missed by her family and friends. She is survived by her daughter, Sister Joan (Madeline) Lanctot, CSJ of Crookston; two sons, Vernon (Hazel) Lanctot of San Antonio, TX, and Edwin (Linda) Lanctot of Payson, AZ; eight grandchildren; fourteen great-grandchildren; a sister, Evelyn Audette of Crookston; and numerous nieces, nephews and other relatives. In addition to her parents, Delia was preceded in death by her husband, Eddie; three brothers, Aime, Noel, and Adrian Brule; sisters-in-law, Lucille Brule and Helen Brule; and great-granddaughter, Acacia Joy Lanctot. Funeral Mass for Delia will be 10:30 AM Thursday, May 14, 2015, at St. Peter's Catholic Church in Gentilly, with Father Vincent Miller and Deacon Dennis Bivens officiating.

Visitation will be from 5 – 7 PM, with a 7 PM Prayer Service, Wednesday, at Stenshoel-Houske Funeral Home in Crookston, and one hour prior to mass at the church.

To order memorial trees or send flowers to the family in memory of Delia Lanctot, please visit our flower store.