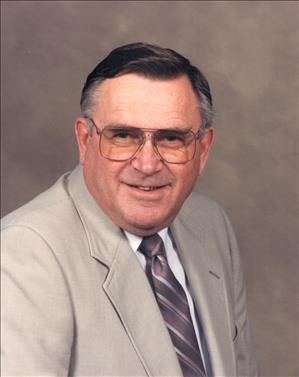 David McCleary, 87, of East Grand Forks, formerly of Fisher, died Friday, May 8, 2015, at Altru Hospital in Grand Forks. David Elliot McCleary was born near Fisher, MN on May 19, 1927, the son of Elliot and Ellen (Merrill) McCleary. He was confirmed in the Lutheran faith and attended Fisher High School, graduating in 1945. In the middle of his senior year, Dave enlisted in the Navy, leaving for the Great Lakes Naval Station at the age of 17. His parents received his diploma in his absence. While in the Navy, Dave graduated from radio school at the University of Wisconsin. After his honorable discharge in 1946, he returned and attended the University of North Dakota.

He was united in marriage to Arlyne Sawyer in Crookston. They lived in Fisher, where they raised their four children. Dave was a life member and past commander of the Fisher American Legion and was a member of the Fisher Lutheran Church. He managed Fisher Municipal for two years and was manager of the Farmers Oil Company in their first year of operation. David was employed at Northern Plumbing Supply of Grand Forks for over thirty years. He enjoyed hunting, fishing, and card playing. He will lovingly be remembered by his wife of 65 years, Arlyne of East Grand Forks; four children, Vicki (Steve) Klaers of White Bear Lake Twp., MN, Lee (Kathy) McCleary of Moorhead, Dean (Natalie) McCleary of Moorhead, and Linda (Randy) Steinwand of Farmington; 11 grandchildren; 13 great-grandchildren; brother, Bill McCleary; sister-in-law, Jeanne Sawyer; brother-in-law, Lloyd Sawyer; and many special cousins, nieces and nephews. He was preceded in death by his parents; two brothers, Courtland and John; sisters-in-law, Marge McCleary, Doris McCleary, and Loy Sawyer; and brother-in-law, Bob Sawyer. A Memorial Service will be held at 2:00 PM Friday, May 15, 2015 at Fisher Lutheran Church with the Rev. Karen Young Trenne officiating. Visitation will be held from 5 – 7 PM Thursday, with a 6:30 PM Prayer Service, at Stenshoel-Houske Funeral Home in Crookston. Military Honors will be provided by the Fisher American Legion. Inurnment will take place in Greenwood Cemetery, Fisher. Online Registry: www.StenshoelHouske.com

To order memorial trees or send flowers to the family in memory of David McCleary, please visit our flower store.