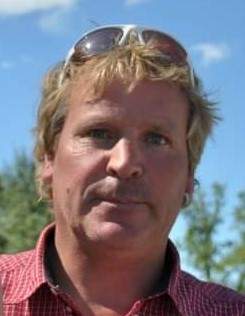 Darren Lee Smulan, 54, of Crookston, MN, passed away from end-stage liver disease Sunday afternoon, August 2, 2020, at the Altru Hospital in Grand Forks with his daughters by his side.

Darren was born on February 7, 1966 in Crookston MN, the son of Odine Edward and Donna Mae (Lee) Smulan. He was baptized and confirmed at the Trinity Lutheran Church and graduated from Central High School with the Class of 1984. Darren was first employed at the Northland Inn in Crookston followed by several years at Phoenix Industries and then with New Flyer. Since October, 2010 he had been working for American Crystal Sugar in the Packaging Warehouse.

Darren always valued his role as a son. He continued to find comfort in his friendship with his father Odine, after his mother Donna passed in 2011. The father-son duo would often be found sharing a meal or golfing.

Darren cherished his beautiful daughters Kelsey and Missy. He was a great father and  loved time spent with his girls, going for walks, golfing, fishing, watching movies or whatever else the girls could talk him into. Darren loved time spent with his 3 grandchildren, being able to spoil them ‘just a little’ and bragging about them a lot. Darren and his grandchildren shared a love of “lame” jokes, and were sure to call each other whenever they came across a new one.

Darren enjoyed playing golf and going fishing with friends. One-liner jokes were his trademark and were often followed by groans from his listeners. A favorite pastime was going “rubberneckin” on a Sunday afternoon.

Darren is lovingly survived by his 2 daughters, son-in-law, and 3 grandchildren: Kelsey and Kean Nelson of Havana, ND and their children: Cameron, Allison, and Eden; and Missy Smulan of Grand Forks, ND. He also leaves his sister and brother-in-law, Darcy and Mark Pester of Crookston, MN; nieces and nephews: Carmen and Chad Knutson of Fisher, MN and their children: Chandler, Clayton, and Conley; and Christian and Sarah Pester of Crookston and their son, Arlie; his dog Lucy; and other relatives, friends, and neighbors. Darren was preceded in death by his parents, Odine and Donna Smulan; and grandparents, Jordis and Sidney Oland and Harold and Borghild Lee. When you remember Darren, remember him with a smile.

A private family service will be held with inurnment to follow in the Oakdale Columbarium in Crookston. Darren’s daughters invite close friends and family to his garage for a celebration of Darren’s life at 1pm Saturday afternoon. In lieu of flowers, his daughter’s ask that memorials may be given in Darren’s name to the RiverView Recovery Center, c/o RiverView Health Foundation, 323 South Minnesota Street, Crookston, MN 56716.

To order memorial trees or send flowers to the family in memory of Darren Smulan, please visit our flower store.