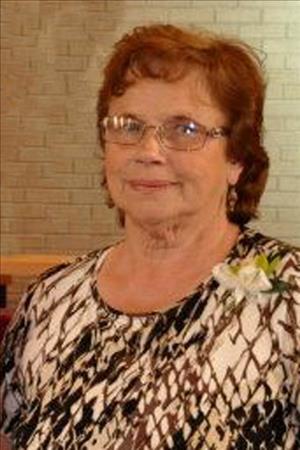 Darlene E. Reinarz, age 73, of Clearbrook, MN passed away in her home, with her family by her side, on December 15, 2016. Darlene was born in Clearbrook, MN on February 10, 1943 to Elmer and Anna (Jacobson) Erickson. She attended Clearbrook Public School and obtained her G.E.D. in 1985. Darlene married Donald J. Peterson on December 26, 1959, and they had five children together; Delilah, Delmar, Doug, Daryl, and Darin. Donald passed away in 2004. On July 5, 2008 Darlene married Hubert Reinarz and was blessed to have his son, Hubert the fourth, join the family. Darlene lived in Bygland from 1964-1989 before moving to Fisher, MN. She then moved back to Clearbrook in 2006. Darlene cooked all of her life. She worked in numerous food services until 1985. From 1985 until her retirement in 2005, she was the head cook at the Fisher Public School. Darlene was famous for her caramel rolls and breadsticks, which she would make once a week for the school children. She also fed her grandchildren well and protected them at school. Darlene was a member of the Fisher Bygland Lutheran Church and later attended the Sam Hill Church. Darlene loved to remodel. She was known for tearing down walls and working on various construction projects. Darlene would give all of her grandchildren cookbooks which would include recipes for all of their favorite foods that she would make for them. Later in life, she enjoyed going to casinos. She would always win and never lost. Darlene was known by everyone to be a tough, but very loving and self-sacrificing person who would do anything for her loved ones. Darlene is survived by her husband, Hubert; her children, Delilah (David) Strand of Fisher, MN, Delmar (Cathryn) Peterson of Fisher, MN, Doug (Stacey) Peterson of Fisher, MN, Daryl (Jacob) Rocca of Pakistan, Darin Peterson of Fisher, MN, and Hubert (Nichole) Reinarz of St. Cloud, MN; grandchildren, Travis, Amy, Alyssa, Bryon, Nichole, Ashley, Cocoa, Blake, Mallory, Jordan, Tanner, Lucas, Shelby, Kaylie, Devin, Anikka, Miranda, Chloe, and Avery; twelve great-grandchildren, with three on the way; siblings, David (Cheryl) Erickson of Clearbrook, MN, Terry (Penny) Erickson of Leonard, MN, Nancy (Kenny) Eck of Proctor, MN, Mickey (Randy) Sunquist of Gonvick, MN, Mark Erickson of Gonvick, MN, and Elmer Erickson Jr. of Gonvick, MN. She is preceded in death by her parents, Elmer and Anna; and her brother, Gary Erickson. May God bless Darlene's memory. There will be a visitation from 5-7 p.m. with a prayer service at 7 p.m. on Tuesday, December 20, 2016 at the Stenshoel-Houske Funeral Home in Crookston, MN. The funeral service will be held at 1:00 p.m. with a visitation one hour prior to service on Wednesday, December 21, 2016 at the Fisher Lutheran Church in Fisher, MN. Interment will be at the Fisher Lutheran Cemetery.

To order memorial trees or send flowers to the family in memory of Darlene Reinarz, please visit our flower store.