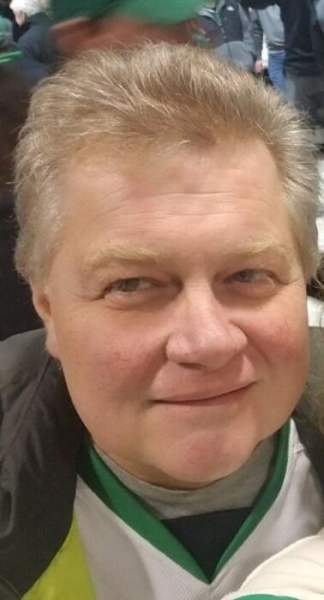 Daniel Leroy Johnson, 58, passed away Thursday night, January 6, 2022 in his home in Mentor, MN surrounded by his family.

Dan was born October 30, 1963 to Stanley and Betty (Hinkley) Johnson in Grand Forks, ND. At just eight months old, Dan had moved to the island of Guam where he lived for two years while his father served in the United States Air Force. After returning to the Midwest, Dan went on to attend and graduate from the Crookston High School in the class of 1982. Following graduation, Dan joined the United States Army to serve his nation in which he was stationed in California. After an honorable discharge, Dan returned to Crookston to attend the University of Minnesota Crookston and received a degree in Hotel/Motel Management. Dan also attended Moorhead State University for Marketing as well as an A and P aircraft mechanic school in Fargo, ND.

Dan worked in several areas throughout his life, starting with a paper-route in Crookston, following with jobs at Piggly Wiggly Supermarket and the Minakwa Golf Course. However, the career Dan dedicated 35 years to was as an elevator operator for SunOpta Sunflower plant where he worked until his passing. Dan would meet his wife and longtime partner Lynell (Vigen) Johnson in 1989, and be wed September 29, 1990 in Adams, ND in the Mountain Lutheran Church. Dan and Lynell would go on to have two sons, Matt Johnson and Tyler Johnson.

Dan will be best remembered for his love of holidays and family gathering. He was especially fond of Christmas for being able to play the role of Santa Claus for his friends, children, and grandchildren, and loved Easter for the time spent with his family Dan also adored Thanksgiving for the same reason, as well as his keenness for the Thanksgiving football games. The Fourth of July was also among his favorites, as he loved setting off fireworks. Another holiday Dan was fond of was Halloween since it was so close to his birthday, and he was lucky enough to take his grandchild Emmy Trick or Treating for the last nine years as this was something he truly loved doing. Dan was an avid fan of many water sports, including water skiing, boating, floating on rafts or something as simple as throwing rocks. Dan was also a dedicated hunter and fisherman and cherished the time he spent doing these activities with his two sons.

Preceding Dan in death are his grandparents, Emil and Elsie Johnson and Irie and Rena Hinkley; his father, Stanley Johnson; his parents in law, Nils and Judy Vigen; and his nephew, Michael Anderson.

A visitation will be held Tuesday, January 11 from 5-7 p.m. with a prayer service at 7:00 p.m. in the Stenshoel-Houske Funeral Home in Crookston, MN followed by a funeral service at 11:00 a.m. Wednesday, January 12 in the First Presbyterian Church in Crookston, MN. Pastor Michael Ozaki will officiate. The services will be livestreamed and can be viewed on the funeral home’s website. Military honors will be provided by the Minnesota National Guard Honors Team and the Crookston Veterans Council.

Arrangements made by the Stenshoel-Houske Funeral Home.

To order memorial trees or send flowers to the family in memory of Daniel Johnson, please visit our flower store.