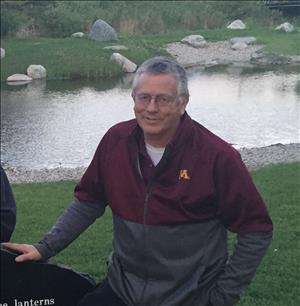 Dale George Martinson, 63 died peacefully Sunday, January 17 at Sanford Vibra Hospital in Fargo, N.D. after a courageous four and a half month battle with brain cancer. He was born Aug. 18, 1952 in Detroit Lakes, MN to parents William and Ovidia Martinson. After high school in Detroit Lakes, Dale served in the US Air Force from 1972 to 1976, with several years in Turkey. He worked for the Sisters of Mt. St. Benedict from 1976 to 2006. While working there, Dale met and married the love of his life, Laura Martinson. The Sisters of Mt. St. Benedict were like family to Dale and Laura, helping raise their children. Dale worked full time at UMC Security Services from 2006 to September, 2015. He was deeply grateful for and loved his UMC family. Dale served in the Crookston Police Reserve for many years. He loved serving his community, and helping others. He will be dearly remembered as a devoted husband, father, and grandfather; his greatest joy was spending time with his family. He leaves a legacy of kind generosity, rooted in his strong faith and love of God. Dale is survived by his wife, Laura; son, Paul of Moorhead, MN; daughters, Yvonne (Jeffrey) Martinson Almhjeld of Thief River Falls, MN and Jannae (Jonathan) Junglas of Fargo, ND; four grandchildren, Aryelle Beam, Kolton and Aibrey Almhjeld, and Jericho Junglas; brothers David and Dean Martinson of Detroit Lakes, MN; sisters, Arlene Meyers of Park Rapids, MN, Helen Seidell of Pelican Rapids, MN, Carol Mott of St. Hilaire, MN, Judy Nelson of Osage, MN, and many nieces and nephews. He was preceded in death by his parents; sisters, Esther Jorgenson and Marilyn Honer; brothers, Douglas and Bobby, all of Detroit Lakes, MN. A memorial service will be held at Wesley United Methodist Church on Saturday, January 23rd at 2 pm in Crookston to celebrate Dale's spiritual journey on this earth.

To order memorial trees or send flowers to the family in memory of Dale Martinson, please visit our flower store.