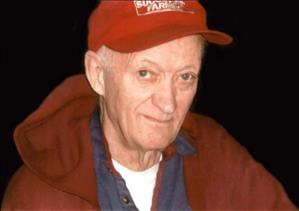 Cyril Joseph "Cy" Benoit, 88, of Gentilly, MN, died Wednesday morning, March 18, 2015, at the Villa St. Vincent in Crookston with his wife, Darlene, and other family members at his side. Cy was born on the family farm near Gentilly, MN on March 21, 1926, the son of Louis E. and Rose (Chouinard) Benoit. He was baptized and confirmed at St. Peter's Catholic Church in Gentilly and attended the Gentilly School. In 1944, Cy graduated from Crookston's Cathedral High School, where he lettered in football. For the next several years he operated the farm before entering the US Army on April 10, 1951. He served with the Fifth Army, 744th Ordinance Company, and was stationed at Ft. Lewis, Washington. Following his honorable discharge on April 9, 1953, Cy returned home and resumed farming. He became engaged to Darlene Marie Hagelie in May of 1963, and on December 28th of that year they were united in marriage at St. Anne's Catholic Church in Crookston. Cy and Darlene made their home in Gentilly Township, where Cy farmed until his retirement in 1985. In semi-retirement he remained busy and active by helping out on the Duane Lien farm during the beet harvest, and volunteering his time at the Corral Lanes Bowling alley in Crookston. Cy was an excellent bowler and accumulated quite a few trophies, pins, and patches during his many years of league and tournament bowling in Crookston and the surrounding area. Many a summer's evening found Cy out throwing horseshoes, again with great success. He was a lifelong member of St. Peter's Catholic Church, and also held memberships in Crookston American Legion Post #20, Fisher American Legion Post #242, and 40 & 8 Voiture 772. Cy was a past commander of the Theodore Stalemo Post at Fisher and enjoyed cooking for the Legion suppers held there. Cy had a heart of gold and was of great help to Darlene's parents as they grew older. He enjoyed volunteering his time and would do anything to help out someone in need. One of Cy's nephews summed things up best when sharing some 'Cy memories,'…"he wouldn't sell you something, but he might just give it to you." Grateful to have shared in Cy's life is, Darlene, his beloved wife of fifty-one years; his brother and sister-in-law, Raymond and Florence Benoit of Gentilly, MN; Darlene's brother and his wife, Christopher and Mary Hagelie of Remer, MN; several nieces and nephews: Diane (Paul) Gratton of Fargo, ND, Kathy (Gary) Shulstad of Halstad, MN, Nancy (Greg) Searle of Eagan, MN, Jane (Ervin) Vigness of Nielsville, MN, Brian (Laurie) Benoit, Gregory (Joyce) Benoit, and Neal (Beth) Benoit, all of Crookston, MN, Brenda (Mario) Ruberto of St. Michael, MN, Jason (Jennifer) Hagelie of Big Lake, MN, Sara (Jon) Lemke of Victoria, MN, Jonathan (Tonya) Hagelie of Brainerd, MN, Melissa (Joseph) Flemmer of Cross Lake, MN; and many great nieces and nephews. He was preceded in death by an infant son, Michael Joseph, who died in June of 1964; and his parents, Louis and Rose. Blessed be Cy's memory.

The funeral service for Cyril "Cy" Benoit will be held on his 89th birthday, Saturday, March 21, 2015, at 10:30AM, at the Stenshoel-Houske Funeral Home in Crookston. Visitation will be at the funeral home on Friday from 5-7PM, with a 7PM prayer service, and also for one hour prior to the funeral. Interment will be at St. Peter's Cemetery, Gentilly, MN. Military Honors will be provided by the Crookston Veterans Council, Fisher American Legion Post #242, and the Minnesota National Guard. Online registry:

To order memorial trees or send flowers to the family in memory of Cyril Benoit, please visit our flower store.