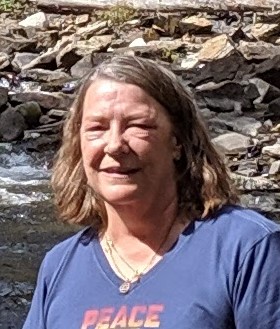 Cindy was born on July 15, 1957, to Jess and Hazel (Taylor) Andringa in Crookston, Minnesota.  She grew up in Crookston and attended school at Washington and Carmen Elementary Schools and Central High School, where she graduated in 1975.  Cindy went on to attend college at St. Cloud State.  She was united in marriage to Paul Ross on June 22, 1984, in St. Cloud.  On July 15, 1985, Cindy received a very special birthday present, the birth of her son Adam.  Cindy returned to Crookston in 1988 and later attended UND, where she graduated with her Bachelor of Science in Social Work. In 1992, she went to work for Polk County as a social worker.  Most recently she worked for Ampride and Care and Share in Crookston.

Cindy enjoyed her time with her family.  She loved following her son to his hockey games and tennis matches.  Likewise, she enjoyed her visits to Montana where she got to white-water raft, visit Yellowstone, and take the tram to the top of Lone Peak.  Cindy was also fond of camping at Norway Beach and her trips to visit Aunt Emma in Indiana.  Cindy’s calling in life was helping people in need, and she fulfilled that calling through her social work.   She worked tirelessly for the disadvantaged, which earned her the respect and friendship of those she served.  Cindy was also kind and understanding and brought those qualities to every aspect of her life.  She will be remembered for her amazing strength, her love for her son, her nephews, and her dog, Hansel.

She is preceded in death by her parents, Jess and Hazel; stepmother, Marlys Andringa, her grandparents, Nellie and Everatte Taylor, and Gertrude and Joe Andringa.

To order memorial trees or send flowers to the family in memory of Cynthia Ross, please visit our flower store.