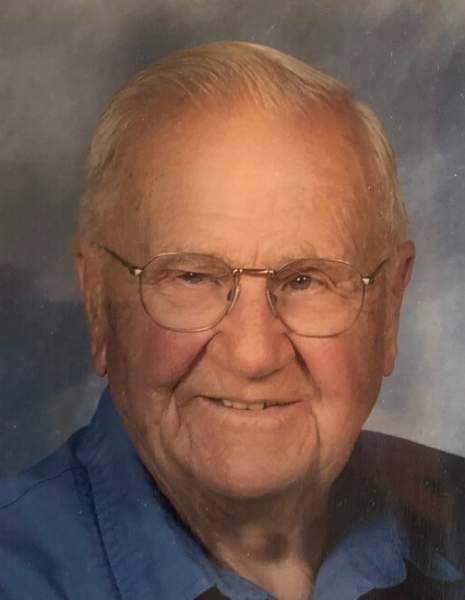 Curtis Lloyd Hendrickson, 101, a lifelong Crookston, Minnesota resident, passed away early Wednesday morning, April 14, 2021, in the Benedictine Living Community-Crookston, with his son, Paul at his side.

Curtis was born in Crookston on May 23, 1919, the son of Leonard and Cora (Austin) Hendrickson. He was baptized and confirmed in the Methodist Church and later joined the Cathedral of the Immaculate Conception in Crookston. Curtis graduated from Central High School with the Class of 1937 where he participated in football and track.

After high school Curt worked in Crookston for a few years at the Grand Movie Theatre, then in 1941 he enlisted in the Minnesota National Guard, and later enlisted in the newly formed US Army Air Corp.  Staff Sergeant Curtis Lloyd Hendrickson proudly served his country from February 10, 1941 to October 15, 1945.

During WWII S-SGT Hendrickson served with the 13th Tech Photo Unit and saw action in Battles and Campaigns at Normandy, Southern France, the Rhineland, Ardennes and Central Europe. During his almost 5-year tour of duty he spent 17 months overseas. For his service to his country S-SGT Curtis Hendrickson was awarded the European-African-Middle Eastern Service Medal, the American Defense Service Medal, Two Overseas Service Bars, a Meritorious Service Unit Badge and the Good Conduct Medal.

Following his honorable discharge in 1945 Curtis returned to Crookston where he became Office Manager for Mason Chevrolet. Harriet Anne Menard had also just returned to her home town of Crookston after receiving her 3-year diploma as a Registered Nurse from the St. Cloud School of Nursing and Cadet Academy  and was employed as an R.N. at St. Vincent’s Hospital. On August 16, 1947 Curtis was united in marriage to the love of his life, Harriet, in a ceremony held in the Cathedral parsonage. Curt and Harriet made their home in Crookston all 65 years of their married lives and together raised a son, Paul Curtis Hendrickson, in a very loving home.

In 1957 Curtis accepted the position of City Clerk-Treasure for the City of Crookston while Harriet was employed as Registered Nurse for the Crookston Clinic and Polk County Health. Curtis became a well known and respected figure in the offices of City Hall for the next 25 years until his retirement in 1982.

Curtis and Harriet spent over 40 years enjoying summers at their lake cabin located on Pikes Bay near Cass Lake, Minnesota. They enjoyed berry picking, cutting fire wood, watching and feeding the birds and critters, many, many campfires, sunsets and adventures with their wonderful Chippewa National Forest neighbors and Grandchildren, Nathan and Stephanie Hendrickson. The couple also enjoyed traveling throughout the United States and spending many winters in Gulf Shores Alabama. Curtis made over 25 trips North to Alaska where he visited Paul and his family in Anchorage. While in Alaska Curtis camped, rafted, canoed, boated, (lakes, rivers and ocean), flew, 4 wheeled and hiked throughout the Alaskan wilderness. Curt was an avid outdoorsman and enjoyed hunting and fishing with his Minnesota and Alaskan fishing/hunting Partners. Curtis had the pleasure of fishing for Walleyes, Northerns, Trout, Salmon, Halibut and hunting for Duck, Geese, Grouse, Whitetail Deer, Caribou, Moose and Bear. Some say Curtis Lloyd is a legend in the “Last Great Frontier”, and that many of his tales contain bits of truth.

Curtis was proud of and held longtime memberships in the Crookston’s American Legion Post 20, VFW Post 1902, Eagle Aerie 873 and was a two-term Exalted Ruler of the Crookston Elks Lodge and a North District Elks Deputy. On May 23, 2019 Curt was honored at a 100th Birthday celebration held in his honor at the Golden Link Senior Center attended and enjoyed by many family members, co-workers and friends.

In addition to Harriet, his beloved wife who pasted in 2012, Curt was preceded in death by his parents, Leonard and Cora Hendrickson: brother and sister-in-law Lyle and Cheryl Hendrickson: sister and brother-in-law Jeanette and Edward Gralian; parents-in-law, Albert and Vella Menard; and siblings and spouses from Harriet’s family: Burke and Rosemary Menard, Frederick “Fritz” and Donna Menard, and Lilah and Ervin “Hap” Tiedeman.

A Memorial Mass of Christian Burial for Curtis Lloyd Hendrickson will be held at 2:30 p.m., Friday, June 25, 2021, in the Cathedral of the Immaculate Conception with The Very Rev. Vincent Miller, presiding. Inurnment with Military Honors will take place at that time in the Calvary Cemetery.

The Family would like to thank all of Curt’s neighbors, relatives, family and friends for all their support, love and care they provided to Dad over the years.

Special thanks to all the caregivers and employees at the Villa St. Vincent Summit Senior Assisted Living Apartments. Memorials may be given to the Benedictine Living Community – 516 Walsh St., Crookston, Minnesota 56716, benedictineliving.org, (218) 275-2102 in Curt’s name.

To order memorial trees or send flowers to the family in memory of Curtis Hendrickson, please visit our flower store.