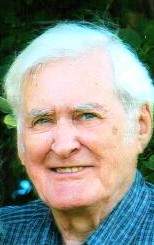 Clarence R. Ellis, 91, of Crookston, MN passed away Thursday, March 29, 2018 at Pioneer Memorial Care Center, Erskine, MN where he had resided in the memory care unit for two years.

Clarence was born October 2, 1926 in Clearbrook, MN to Kenny and Petra Ellis.  He attended Clearbrook schools and graduated high school in 1945.  He played football.

In 1946 he married his high school sweetheart, Myrtle Staehnke.  They resided in St. Paul and Greenbush, MN and moved to Salol, MN in 1951, where Clarence managed the grain elevator for 23 years. In 1974 he and Myrtle moved to Crookston where he was an area field representative for Farmers Union Grain Terminal Association (Harvest States) for 18 years.  He retired in 1992.

Clarence enjoyed playing his guitar, oil painting, volunteering, traveling and spending time with his family.  He was a member of the Crookston Eagles.  He and Myrtle were members of Salol First Lutheran Church and St Paul's Lutheran Church, Crookston.  Clarence was a wonderful husband, father, grandfather and neighbor.  He will be greatly missed by his family, friends and all who knew him.

Clarence is survived by his wife of 71 years, Myrtle; sons David (Bonnie) and Gene; granddaughters Hayley Ellis (Hernando Tellez) and Flannery Ellis; one great granddaughter.  He was preceded in death by his parents and his three brothers.

A memorial service will be held to honor Clarence’s life at St. Paul’s Lutheran Church in Crookston, MN, on June 16, 2018, at 2:00PM. Visitation with the family will be held one hour prior to services.

To order memorial trees or send flowers to the family in memory of Clarence Ellis, please visit our flower store.