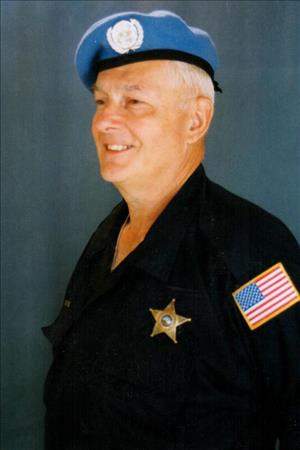 Charles Lee "Chuck" Averill, 77, of Crookston, MN, passed away peacefully with his family by his side, on Saturday, November 26, 2016, at the Villa St. Vincent in Crookston. Chuck was born at Tracy, MN on March 4, 1939 to Delmar and Ruby (Hulett) Averill, and graduated from Tracy High School in 1957. He served in the Minnesota National Guard for three years. On September 22, 1957 Chuck was united in marriage to the love of his life, Mariann Nackerud, in Walnut Grove, MN. Chuck and Mariann raised five children. Chuck's first employments were with the Tracy Herald, Bloomington Sun and the Hanska Herald newspapers. In 1964 he began his 35 year law enforcement career starting with the University of Minnesota in Minneapolis-St. Paul. After a few years, they moved to Crookston where he became the first police officer to work on the U of M-Crookston campus. He then accepted a position with the Fosston Police Department. He continued his career by joining the Polk County Sheriff's Office as a deputy. In 1999, he accepted a one year position to serve with the United Nations Peacekeepers in Kosovo. Chuck had a Christian faith and was a pillar in the Bible Baptist Church. He loved sharing his faith and played a part in changing many people's lives for the Lord's sake. He enjoyed fellowship with his friends. He also owned a gun shop business and was an accomplished gunsmith. He enjoyed gun shows, hunting and reading (especially history). Chuck leaves his beloved wife of 59 years, Mariann; their 5 children, James Averill of Hannaford, ND, Rhonda (Ron) Peterson of Black Hawk, SD, Mari (Bret) Hansen of Owatonna, MN, Rolf Averill of Oro Valley, AZ, and Rachel (Darrell) Schindler of Grand Rapids, MN; 13 grandchildren; 15 great-grandchildren; brother, Keith (Sharon) Averill of Joplin, MO; sister, Phyllis Floyd of Minneapolis, MN; and many other relatives and friends. He was preceded in death by his parents, Delmar and Ruby; and his aunts and uncles. Chuck was especially proud of his grandchildren and great grandchildren. He enjoyed attending family graduations and weddings. May God richly bless the memory of Charles Lee Averill. The funeral service for Chuck Averill will be held at 10:30 a.m., Friday, December 2, 2016, at the Bible Baptist Church in Crookston, MN. Visitation will be for one hour prior to the service. Interment will be at the Oakdale Cemetery in Crookston, MN. www.stenshoelhouske.com

To order memorial trees or send flowers to the family in memory of Charles Averill, please visit our flower store.