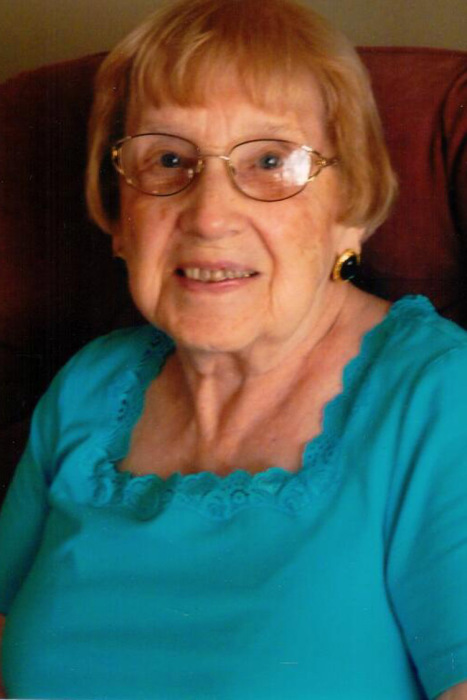 Charlene Terpstra 99, lifelong resident of the Crookston area died on October 16, 2018 at the Villa St. Vincent where she had been a resident, first at the Summit, and later in the Villa, since 2013.  The daughter of Dutch immigrant parents, George and Clara (DeYoung) Brolsma, Charlene was born on the Perry farm in Polk County, September 7, 1919. She grew up on farms near Eldred and Beltrami and attended school through the 8th grade in the Eldred Consolidated Schools and in rural Beltrami.   Later she earned her GED from Crookston Central High School.

As a young girl, she worked as a housekeeper for families in the Crookston area and later at the Sunny Rest Sanatorium.  On September 26, 1942, she married Ernest Terpstra. She and Ernest worked at Pederson Biddick from 1942-1946 and in 1947 they purchased a farm near Crookston where they and, Ernest’s brother Clarence, farmed together for over 30 years.

She raised her two children there and played an active role in the family dairy farm.  She was a member of the Parnell Township Homemakers group and an active parent leader in the North Star 4-H Club when her children were members.   She was a longtime member of the First Presbyterian Church where she was involved in various women’s Bible study groups, sang in the choir and taught Sunday School.  Charlene is, however, most remembered for her 19 years as a sales associate for JC Penney where she worked until the store closed in 1988.  In 1980, because of Ernest’s declining health, Charlene and Ernest moved from the farm to Hoven Lane in Crookston.

Charlene enjoyed traveling.  She traveled to Japan, to much of Europe, Hawaii, and to many other US locations.  She was also an avid seamstress and gardener and she loved caring for and watching her grandchildren grow up.    She loved to bowl, had a stellar average and was a part of many bowling leagues over the years. Charlene also enjoyed family gatherings when her Brolsma siblings and their families would come together for birthday parties and reunions.

The family wishes to thank the Villa staff and nurses for their steadfast care over the last years.

Charlene was preceded in death by her parents, an infant daughter, her husband, Ernest, in 1986, brothers George, Allen and Herman and sisters Agnes and Sady and their spouses.

Funeral services are at 2:00 p.m. with a visitation one hour prior to service on Monday, October 22, 2018 at the First Presbyterian Church in Crookston, Minnesota. Interment will be at Oakdale Cemetery in Crookston.

To order memorial trees or send flowers to the family in memory of Charlene Terpstra, please visit our flower store.