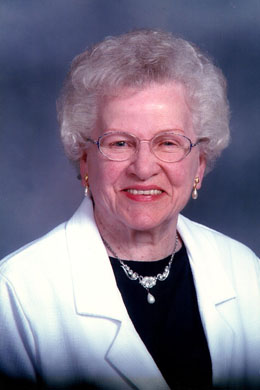 Carolyn was born in Forest River, ND on January 10, 1919, the daughter of Fred and Emma (Martens) Schultz. She was baptized and confirmed at Our Saviors Lutheran Church in Crookston. She attended most of her school years in Crookston.

On January 14, 1941, Carolyn was united in marriage to Willard L. Severin. Their home was made in Crookston. In June of 1941, Willard and Carolyn were made the proud parents of their daughter, Shirley.

In 1952, Carolyn was employed by Sears Roebuck and Co. for 21 years; 8 years as credit manager, and 13 years as an office clerk. She retired from Sears in 1974, and was home only a few months before she became employed by the Climax Credit Union in Crookston, where she spent 8 years as office manager. Carolyn retired from the Credit Union in 1982. She was a member of Trinity Lutheran Church, the Eagles Auxiliary, and the Riverview Auxiliary.

Over the years, Carolyn and Willard made many trips to Minneapolis and Apple Valley, where their daughter Shirley lived. From there they traveled to San Diego, CA, Denver, CO, and many other places.

She is survived by 2 sisters-in-law, Gail Schultz and Louise Schultz, and several nieces and nephews.

The funeral service for Carolyn will be held at 2:00 p.m.  with a visitation one hour prior to service on Wednesday, July 25, 2018 at the Trinity Lutheran Church in Crookston, MN. Interment will be at Oakdale Cemetery in Crookston.

To order memorial trees or send flowers to the family in memory of Carolyn Severin, please visit our flower store.