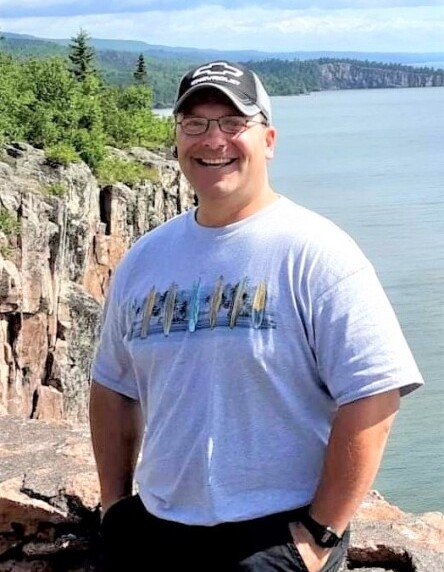 Brock Lawrence Altringer, 46, of Duluth, MN, and formerly of Crookston, passed away at his residence unexpectedly Saturday, December 19, 2020.

Brock was born in Minneapolis, MN on December 13, 1974 to birth parents, Jean Mittelsteadt and Denny Abbe. He grew up in Crookston where he was raised by his dad and mom, Larry and Diane (Jasper) Altringer. Brock was baptized in Trinity Lutheran Church, confirmed in St. Paul’s Lutheran Church, and educated in Crookston Public Schools. While attending Central High School he played football and hockey for the Pirates before graduating as a member of the Class of 1993. Brock went on to attend the University of Minnesota Crookston where he majored in Business while also playing football for the UMC Trojans.

Throughout his working career Brock was first employed at Crookston Welding and then in the construction business.  He worked as a carpenter in Crookston and the nearby communities of Fisher and Erskine. He next lived in East Grand Forks while being employed by ICS of Grand Forks. Brock later lived and worked for home builders in Bemidji and Brainerd until moving to Duluth in June of 2018 where he was a member of the Carpenters Union of Duluth. He was a longtime member of St. Paul’s Lutheran Church in Crookston.

From his earliest years Brock loved the outdoors and greatly enjoyed spending time at Union Lake near Erskine. Fishing for bass was his “thing” and he shared his expertise with his sister, Jennifer, while teaching her how to catch the trophies. Jen can tell some hilarious stories about a few of their outings. Brock also liked to go hunting and four-wheeling with his family and friends on hunting land near Mahnomen, MN. Several years ago he found out he was pretty darn good at Foosball. He and a team of friends won several tournaments around the area and had successful results at the state level as well. The greatest joy Brock found in his life was reserved for his daughter, Sierra, and son, Cyle. Being a part of their lives for the past several years and sharing that pride with his Mom, Dad, Sis, and family meant the world to him.

Brock is lovingly survived by his daughter Sierra Rae (19) of Bemidji, MN; son, Cyle Rex (13) of Erskine, MN; his parents, Larry and Diane Altringer of Union Lake, Erskine, and Grand Forks, ND; sister and brother-in-law, Jennifer and Mike Nelson of Crookston, MN; 2 nephews and a niece: Shaun Nelson of Grand Forks, and Carter and Morgan Nelson of Crookston;  a brother, Shalom; a sister, Vanessa; a brother, Lucas; and many aunts, uncles, cousins, extended family, and friends. He was preceded in death by his grandparents: Harvey and Dorothy Altringer and Stanley and Madeline Jasper; 4 uncles: Allen Altringer, Arvid Kuehl, Bob Durbin, and Tom Peterson; and 3 cousins: Tracy Lynn Altringer, Cole Altringer, and Tiffaney Altringer. Blessed be Brock’s memory.

The life of Brock Altringer will be remembered at a Memorial Service with Sharing of Memories to be held at 4:00 p.m. Thursday, June 10, 2021, in the Crookston Inn. It will be led by Celebrant Tim Hanson, a Crookston native and lifelong friend of the family. The service will be livestreamed by logging on to www.stenshoelhouske.com 5 minutes before the service time, going to Brock’s obituary and following the prompt at the bottom of the page to view. Visitation with the family will begin at 3:00 p.m. and you are invited to a continued time of fellowship and refreshments following the service. Memorials may be given in Brock’s name to the Oakdale Cemetery Ossuarium Fund to be used toward the building and installation of the new structure which will be placed in the coming months.

Online registration and condolences may be given at www.stenshoelhouske.com

To order memorial trees or send flowers to the family in memory of Brock Altringer, please visit our flower store.