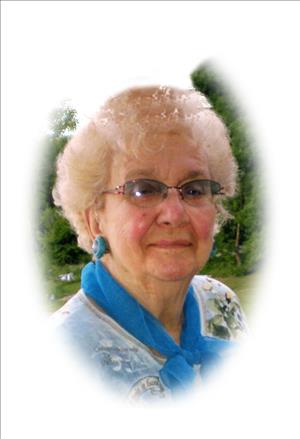 Betty Jean (Bohlig) Janecky, 97 years old, was born December 5th, 1918 to Mabel (Wrabek) and George Bohlig in St. Paul, Minnesota. She graduated from St. Paul Central in 1937. She attended the University of Minnesota where she pledged Kappa Alpha Theta. In 1940 she married Dr. Frank (Stoney) Janecky, an optometrist, on Aug. 3rd at the House of Hope Presbyterian Church in St. Paul. Betty and her husband resided in Crookston for 42 years. Betty was a former member and president of Agassiz Study Club and Matrons. Betty loved dancing, thus the membership in Latin America and Town and Country Dance clubs, playing tennis, rooting for the Vikings, sewing (most of her daughter's childhood clothes), knitting, entertaining, giving financial and stock market advice, traveling and cruising to exotic places, and feeding the birds in the winter. She would sit in her favorite bedroom chair until late at night and read wildlife magazines, financial reports, the Bible at least twice, and cookbooks. She was a strong, wise woman. She loved a glass of wine, telling hilarious jokes, cooking new delicious dishes for family and friends (e.g. Good to the Last Lick and Rum Cake), but most of all she enjoyed Duplicate Bridge with her bridge club. In 1942, a daughter, Jill Louise, was born. In 1944, a son, John Franklin, was born. In 1958, a daughter, Julie Ann, was born. Sadly a drunk driver in Mesa, AZ killed Julie at the age of 26. In 1950, the Janecky's built a summer home on Union Lake. In 1981, after Dr. Janecky retired, they spent winters in Sun City West, AZ, where they maintained a home. Summers were still spent at Union Lake, MN. In 1999, they sold their Arizona home and lived permanently at the lake. Betty is survived by her daughter and son-in-law, Jill and Mario Schisano of Crookston; son and daughter-in-law, Jack and Barbara Janecky of Mobile, AL; grandsons (sons of Julie), Justin Pries, Jamie (Chelsea) Pries in AZ; grandchildren, Marco (Nina) Schisano of Minnesota, Caryn Janecky; Susan (Justin) Taylor, and John Janecky (Sara Katherine) of Alabama, Maria (Matt) Studen of Colorado. She has 9 and a half great-grandchildren, and many cousins, nieces and nephews. Betty was the longest living member of her Janecky and Bohlig families. She was preceded in death by her daughter, Julie Janecky Pries; her mother and father, Mabel and George Bohlig; 2 brothers, George and Jack Bohlig; and one sister, Clara Lee. A memorial service will be held at the Presbyterian Church Friday, March 18th at 4:00 p.m. Betty's ashes will be placed in the columbarium at the Presbyterian Church in Crookston, of which Betty was a member and former Deacon. Memorials may be given to the First Presbyterian Church. Please send them to Jill Schisano at 1006 Groveland Ave. Crookston, MN, 56716. Thank you so very much!

To order memorial trees or send flowers to the family in memory of Betty Janecky, please visit our flower store.