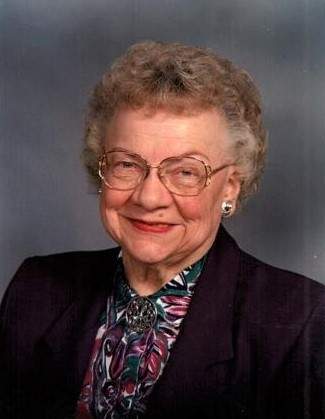 Berneil “Bonnie” Carrie Nelson, 95, of Crookston, MN, passed away Monday, December 21, 2020, at the home of her niece, Becky Rickert and husband, Ted, in Brownton, MN, where she had been being cared for since September 1st.

Berneil Carrie Nelson was born on January 8, 1925 in Hallock, MN to Victor and Edith (Nelson) Nelson. She was baptized and confirmed at the Red River Lutheran Church, Hallock, raised on the family farm, and graduated from high school at the Northwest School of Agriculture in Crookston in 1942/Advanced Class of 1943. Berneil began working at the Northwest School in the fall of 1943, starting as a secretary to the registrar and then as assistant librarian until 1966. That year marked a change in mission as the campus became affiliated with the University of Minnesota. She continued on in her new role as assistant librarian for Learning Resources until her retirement in 1990 after 47 years of service to the Northwest School and University of Minnesota. She continued to be a wealth of information to the University as she updated the Alumni Relations office with news, happenings, and passings of alumni to be recorded in the Torch magazine. In recognition of her outstanding contributions to the two schools she so proudly devoted her life to, Berneil received the NWSA “Top Aggie” award in 1974; the UMC Torch & Shield Award in 1981, which is the highest award an individual can receive from the University; and the University of Minnesota Crookston Champions Club Award in 2005. Berneil was very involved with the Northwest School Alumni Association, serving for over 24 years on the Board, as well as, many more years as an ex officio member. During the annual NWSA reunions held on Campus alumni would arrive and their very first words were always “Is Berneil here?” As she manned her usual post at the registration table each alumnus would receive a big smile and the warmest of greetings as she caught up with what was going on in their lives. At the 2017 reunion Berneil was presented the NWSA Alumni “One of a Kind” Award and a $1000.00 annual UMC scholarship was established in her name by the Heritage Scholarship Fund. The prestigious award was prefaced by remarks praising her continuous years of support and dedication to the NWSA and the University of Minnesota and always being the bright and shining light that everyone looks forward to seeing; making Berneil truly “One of a Kind.”

Berneil was a devoted member of the Trinity Lutheran Church and served as church librarian from before 1972 through December of 2015. She also actively participated in WELCA, the Martha Guild as chairperson, and the ‘Friendly Visitors’ program when it first began. In her younger years Berneil enjoyed bowling in a local ladies’ league. In retirement her passions included reading, embroidering, attending Senior events, visiting with family, and as an avid fan, watching the Twins and Vikings games. Berneil was a much-loved sister, aunt, and friend, and will be sadly missed by all who were a part of her life.

Berneil is survived by 2 nieces, Peggy (Paul) Anderson of Shakopee, MN, and Becky (Ted) Rickert of Brownton, MN; 2 nephews, Gary (Carmen) Flowers and Douglas Flowers of Litchfield, MN; several great and great-great nieces and nephews; and extended family. She was preceded in death by her parents, Victor and Edith Nelson; and beloved sister and brother-in-law, Vicki and Bernard Flowers. Treasured be the memory of Berneil “Bonnie” Carrie Nelson.

The funeral service honoring the life of Berneil Nelson will be held at 1:00pm, Saturday, April 24, 2021 in the Stenshoel-Houske Funeral Home in Crookston, MN with The Rev. Greg Isaacson, officiating. Visitation will be for one hour prior to the service. The funeral will be livestreamed for off-site viewing by going to www.stenshoelhouske.com 5 minutes before the start, then to Berneil’s obituary where a prompt will appear to view the service. Additionally, it will be recorded and may be watched again for up to a year. Burial will follow the funeral at 3:30 pm Saturday in the family plot in Red River Cemetery, rural Hallock, MN.

Online registry and condolences may be made at   www.stenshoelhouske.com

To order memorial trees or send flowers to the family in memory of Berneil "Bonnie" Nelson, please visit our flower store.