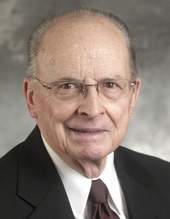 Bernard Louis Lieder, 97, of Crookston, MN, died Sunday, August 23, 2020. Bernie was born on February 19, 1923, in Greenwood Township, MN, to Christ and Rose (Schmidt) Lieder. During his early years, Bernie’s parents ran a barbershop, butcher shop, and bar/restaurant in what is now the River Inn in Hanover—a place he fondly visited often.  Growing up in hard times, Bernie developed the strong work ethic, waste-not attitude, and appreciation for nature evident throughout his life.  He was baptized and confirmed at Greenwood Lutheran Church near Hanover, and graduated from Rockford High School in 1940.

Following artillery training and engineering school at the University of Illinois and Purdue University, Bernie served in the European theater of World War II with the 102nd Infantry Division Ozarks.  Because he was fluent in both English and German, he played an instrumental role as an unofficial translator in the liberation of German towns and camps at the end of the war, liaising between Allied forces and German citizens and displaced persons.  After his return from Europe, he spent many years in the Army Reserves.

In the early 1950s, Bernie moved north to work for the Polk County Highway Department. In November, 1952, he was united in marriage with Shirley Bleck at Cross Lutheran Church in Rockford.  They made Crookston their home, raising three daughters in a wonderful neighborhood and building on their faith as active members of St. Paul’s Lutheran Church.  The family travelled often, by car if possible so as to enjoy the journey—and the infrastructure—as much as the destination.  Somehow Bernie found time to pitch for a slow-pitch softball team into his late 60s.

Overseeing Polk County’s infrastructure, and planning for its growth, brought him great satisfaction; the roads and bridges of Polk County were as the lines on his hand.  Involvement with county, state, and national transportation organizations, and connection with the people who lived or worked on county roads and bridges, unintentionally foreshadowed his next steps.

Soon after retiring as Polk County Highway Engineer, Bernie accepted the DFL party’s nomination to serve District 2A (later 1B) in the Minnesota House of Representatives, where he became a spokesperson for transportation issues.  He was elected to his first term in 1984, with his family’s full support; although Shirley’s health kept her from being a physical presence in St. Paul, she was the underpinning of the deep relationship he had with his constituents.  Bernie drove between Crookston and the Capitol weekly for the entirety of his legislative career.  He had immense respect for the people he worked with, and among his closest colleagues were the legislative staffers, whom he valued deeply.

Bernie Lieder was the last World War II veteran to serve in the Minnesota Legislature. His experiences were archived in the Greatest Generation exhibit at the Minnesota Historical Center, and he introduced legislation for funding to establish the World War II Veterans Memorial on the State Capitol grounds.  As part of a 2009 delegation to the Holy Land, he was presented the rare honor of rekindling the eternal flame and laying a wreath at Israel’s Holocaust museum, Yad Vashem.  The recognitions bestowed on him over his lifetime left Bernie humble, thankful, and eager to continue in service to others.

Following his departure from the Legislature in 2010, he continued to serve on transportation task forces, take part in roundtable discussions, and speak publicly or privately to those who sought his wisdom--often armed with little white boxes of “Chippers” from Widman’s Candy Shop.  He cultivated his love of travel with several trips to Europe, and visits to his children in the US and Canada. He also took part in a one-day Honor Flight from Minnesota to the Mall in Washington, DC.

Even as his health began to present challenges, Bernie was able to continue to live in the home he and Shirley built in 1955, comforted by the footprint he knew by heart. This would not have been possible without the good friends who were a second family to him, and his gratitude was boundless.

He was predeceased by his wife, Shirley; his parents, Christoph and Rose, and Shirley’s parents, Robert and Bertha Bleck; three siblings and their spouses: Hubert and Erna Lieder, Armin and Lula Lieder, and Bob and Doris Sinclair; his sister-in-law and her husband, Marguerite and Clyde Henson; and Roberta’s husband, Ivar Lemmage.

Due to Covid-19 restrictions the funeral service for Bernard Lieder will be private, but a public livestreaming of the service will be available starting at 9:45 am on Friday, September 4, 2020, at stenshoelhouske.com, and available there for later viewing. Pastor Loren Mellum will officiate.

A public graveside service with military honors will be held at 2:00 pm on Saturday, September 19, 2020, at Elmwood Cemetery in Rockford, MN. Pastor Bill Reck will officiate. Masks are mandatory, and out of respect for all please observe strict social distancing protocols.

In lieu of floral tributes, memorials can be sent to the organization of your choice.  In Bernie’s memory, treat yourself to a little chocolate now and then--and always, always exercise your right to vote.

To order memorial trees or send flowers to the family in memory of Bernard Lieder, please visit our flower store.