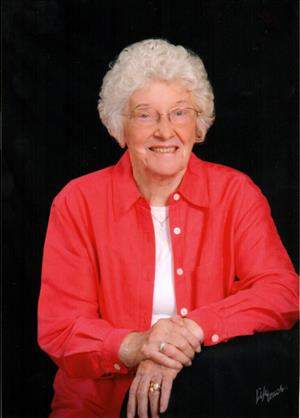 God called Bernadette J. Blokzyl, age 91, of Crookston, MN. to her Heavenly home, March 29th, 2016 at Villa St Vincent, Crookston, surrounded by her loving family. Bernadette was born in Gentilly, MN. the daughter of Stanislaus & Albina Fortier, youngest of six children. She was baptized and confirmed at St Peter's Church in Gentilly. She attended a two room school house in Gentilly, MN. After grade school she attended St Joseph's Academy in Crookston, MN and graduated 1942. She and her sister Loretta were the only ones in the Fortier family to attend high school .At the age of 18 she worked at The Barrel, she later moved to Minneapolis where she worked as a secretary for 3M. She married Bernard (Bud) Blokzyl January 28th, 1946 at St Peter's Catholic Church in Gentilly. She and Bud then moved into an apartment in Crookston and started their family. Over the years their marriage was blessed by the births of 10 children. She said the best time of her life was when her children were small, she loved playing and watching them grow. She and Bud enjoyed camping, bowling, fishing, playing cards with close friends especially Howard and Evelyn Hanson. They enjoyed traveling with Prudential and spending time at the lake with their children. Later they enjoyed traveling to visit their children. Most important to her and Bud was their deep faith in God. They knew all they had come from Him. She was a member of the Cathedral of the Immaculate Conception, Catholic Daughters, and St Francis of Assisi Circle. She was active with the Campfire girls, when her daughters were young. She was a talented seamstress, and took joy in making clothing for her family, including her daughters' wedding gowns and the leisure suits Bud loved to wear. Bernadette is survived by her children: Glenn (Carol) St Paul MN, Joyce (George) Montrose, Co, Bill (Martha) Athens Ga., Loanne (Michael) Marthaler, Englewood, Co, Karen (Duane) Hanson Crookston, MN, Mary (Kevin) Grenier Elizabeth, Co. Connie Harris, Denver, Co, Suzanne (Larry) Franz, Colorado Springs, Co. Laure (Gary) Williamson, Crookston, MN, Denise (Steve, "Skippy") Hutchinson, Thief River Falls, MN, 24 grandchildren, 25 Great Grandchildren, and 1 Great- Great Grandson, and many nieces, nephews, and other relatives. Sadly, Bud passed away April 10th, 1997. She was preceded in death by her parents, Stanislaus and Albina; sisters, Cecilia and Loretta; brothers Adrian, Paul and Maurice. The Visitation for Bernadette will be held on Sunday April 3rd at the Cathedral of the Immaculate Conception from 5-7pm with a prayer service at 7pm. The Rosary will be prayed after the service. Visitation will continue 1 hour prior to the funeral Mass at 2pm Monday, April 4th at the Cathedral of the Immaculate Conception in Crookston, MN. Interment will be at Calvary Cemetery in Crookston. Arrangements made by Stenshoel-Houske Funeral Home. In lieu of flowers, the family requests memorials be made to the Cathedral, or St Peters Catholic Church, Gentilly.

To order memorial trees or send flowers to the family in memory of Bernadette Blokzyl, please visit our flower store.