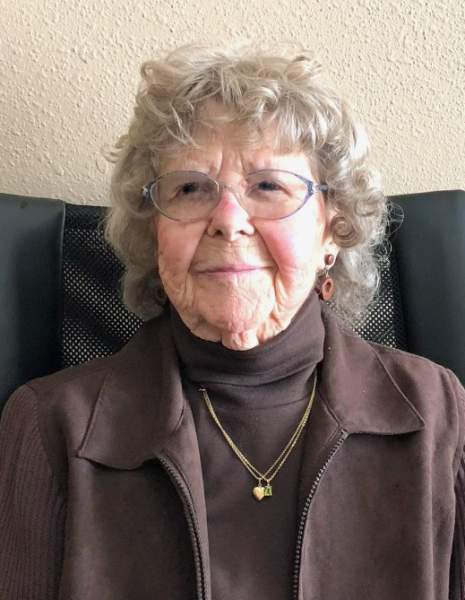 Arline was born to Oscar and Ragna (Rindal) Romundstad on August 15, 1922, in Eau Claire, Wisconsin. The family moved to rural Strum, Wisconsin.  She attended Norseville School through 8th grade, walking to school from the home farm. Arline graduated from Lincoln Hill High School, Osseo, Wisconsin in 1940.  After graduating from high school Arline worked at The Farmer Store in Eau Claire, WI.

Arline met her husband Eugene C. Miller while roller skating in Augusta, WI.  They became engaged while he was enlisted in the Army Air Force. They were married at Strum, WI on February 14, 1944.  The couple soon moved to Eagle Pass, Texas, and on to future Air Force assignments before the war ended.

Arline & Gene moved to Minnesota in 1947 where Gene held teaching positions in Perham, Fergus Falls, and at the Southern School of Agriculture in Waseca.  In 1954 they moved to Crookston, MN and lived on the Northwest School of Agriculture campus. Arline worked as a teachers’ aide and secretary at Washington Elementary School from 1970–1982 where she enjoyed the children & staff. Arline was an active member of Trinity Lutheran Church where she was a Sunday School teacher, in WELCA and helper for communion services at local nursing homes.

Arline enjoyed knitting, playing cards in her bridge club and was in the Riverview Hospital Auxiliary. She enjoyed her Norwegian heritage traveling to Norway to visit relatives.  Christmas meals required lefse, lutefisk and rice soup. After moving off the campus to “The Ranch” Arline was known for her welcoming hospitality to many friends and family through the years with young and old cowboys and cowgirls showing up for campfires and hot dog roasts. Moving into town brought new friends to Arline's door with many fun coffee times around the kitchen table.

Arline will be remembered by her helpful attitude, friendly laughter, and love of all people.

The funeral service will be held at Stenshoel-Houske Funeral Home, Crookston, Minnesota on Thursday, February 24, 11:00 am with Trinity Lutheran Church, Pastor Greg Isaacson officiating. Visitation at 10:00 with lunch following the service. Inurnment will be in Strum, Wisconsin on a later date.  Memorials will be designated to Trinity Lutheran Church TV fund. The service will be livestreamed by going to Arline’s obituary page at www.stenshoelhouske.com

To order memorial trees or send flowers to the family in memory of Arline Miller, please visit our flower store.