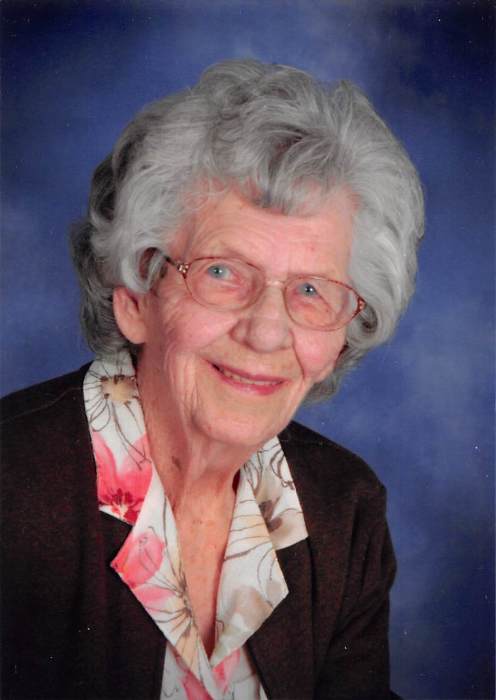 Arline Ruth Knutson, age 96, of Crookston, past away peacefully on Sunday March 3, 2019 at home surrounded by her family. Funeral services will be held Friday, March 8th, at 11:00 am, at Our Saviors Lutheran Church, with Pastor Steve Bohler officiating. Visitation will be held Thursday from 5:00 to 7:00 pm with a prayer service at 7:00 pm at the Stenshoel-Houske Funeral Home, and will continue one hour prior to the service at the church on Friday.  Interment will be in the Oakdale Cemetery in the Spring.  Arrangements are with Stenshoel-Houske Funeral Home in Crookston.

Arline was born on April 6, 1922 to Emil and Clara (Hoffman) Volker in Fisher, MN. She grew up on the family farm outside Fisher and attended country school by Fisher through the 8th grade.  After school, Arline began waitressing and later she worked as nanny.  During this time, she met and eventually married Guy Edward Knutson. The couple exchanged vows on September 25, 1947 in Crookston. They bought a house in Crookston right after their marriage and continued to reside there through their final days. Guy passed away in January 1997.  Arline cleaned homes for many years while they lived in Crookston. She continued this until she became unable to drive in her mid-80’s.

Arline was a member of Our Saviors Lutheran Church in Crookston.  While a member, Arline was very active in the church, and was a Sunday school teacher there for 50 yrs. Her faith was very important to her and she loved to sing hymns. One of her favorites was “Jesus Loves Me”, which she would sing with her Sunday school students and her grandchildren. It was apparent she loved kids. Fondly known as Grandma K to not only her grandkids, but to most everyone who know her. She had an open door and welcomed all who came onto her home with open arms and a cookie. She had a deep love for her family, and even in her last days, she would open her eyes and great those who came to visit with a smile. Arline was a devoted mother, grandmother, aunt, and friend to all, and she will be dearly missed.  She was known to the great-grandkids as “Grandma Cookie” because she always had cookies on hand for them to enjoy.  Aside from baking, Arline was as an avid fan of the Minnesota Twins Baseball team. She faithfully watched their games on tv.

Fond memories include family dinners every Sunday after church and homemade brownies always on the counter. She also loved animals, especially her grand-dogs Bella and Whiskey, who knew she would share whatever she was eating.

To order memorial trees or send flowers to the family in memory of Arline Knutson, please visit our flower store.