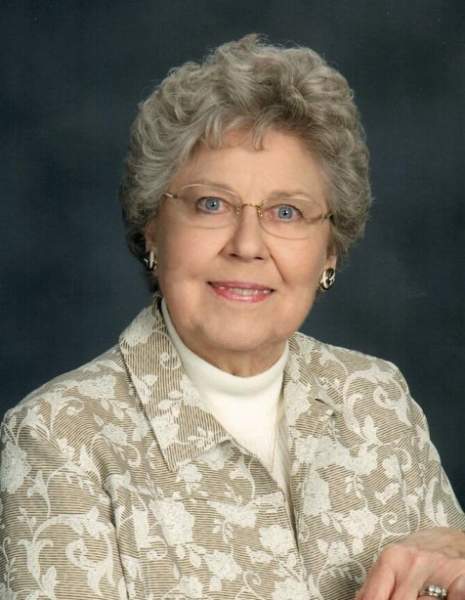 Arleen Fay Wagner, 91, of Park Rapids, MN, and a former longtime Fisher, MN resident, passed away at Diamond Willow Assisted Living in Park Rapids Tuesday afternoon, March 12, 2019. She was comforted by her 3 children who had been at her side throughout her last days.

Arleen was born in Plummer, MN on February 2, 1928, the daughter of John and Lena (Gjermundson) Norby. She was baptized and confirmed at Immanuel Lutheran Church in Plummer, where she grew up, and was a 1945 graduate of Plummer High School. Arleen then furthered her education at Bemidji State College. She was united in marriage to Norman Roy “Bud” Wagner on May 2, 1947 at Fisher, MN. Home for Arleen and Bud was in Fisher, where they lovingly raised their 4 children: Dee, Larry, Robert, and Joan. Sadly, Larry passed away on December 28, 1980. Life for the family was wonderfully busy as Bud farmed, taught and coached at Fisher High School. Arleen, in addition to being a fulltime housewife and mother, was KROX’s voice of Fisher for a number of years and also worked for a time in the KROX offices. Later in life she began to work for MNDOT at the Travel Information Center just outside of Fisher as a Travel Consultant until the Information Center was closed. Arleen and Bud never missed a school activity of the kids; whether it be games, concerts, or any other event they were involved in. They were devoted members of Trinity Lutheran Church and Arleen was active in the Lutheran Women’s Missionary League, her bible study group, and taught Sunday School classes. She was active in the Republican Party at the local and state levels for many years, as well as community affairs. Arleen was a member of the American Legion Auxiliary, The Sons of Norway Lodge of Grand Forks, the Fisher Chamber of Commerce, and served on the City Council. She was appointed to a number of County Committees throughout the years and was active in the Fisher School activities. She was a board member, secretary, and Life Member of the Polk County Historical Society. Arleen was also a member of the Minnesota State Historical Society and assisted many people from across the world in genealogy searches. She wrote about Fisher’s Landing History, gave talks and picture presentations, and made possible the stone and bronze historical monument marking the location of the old Fisher’s Landing. She donated her collection of pictures of early years of Fisher to the City. Bud passed away on September 17, 1983. Arleen continued to make her home in Fisher and remained active in the church and community until moving to Brainerd, MN, and later to Park Rapids to be near her family there.

Arleen was a bird watcher and her backyard feeders attracted many kinds of birds – some quite unusual for this part of the state. She took pictures of them to show that they had visited her yard. She was especially fond of Cardinals.

A memorial service celebrating Arleen’s life will be held at 11:00am, Monday, March 18, 2019, at the Trinity Lutheran Church in Fisher, MN, with The Rev. Larry Harvala, officiating. Visitation with the family will be for one hour prior to the service. Inurnment will take place in the Greenwood Cemetery, Fisher, in the spring.

To order memorial trees or send flowers to the family in memory of Arleen Wagner, please visit our flower store.