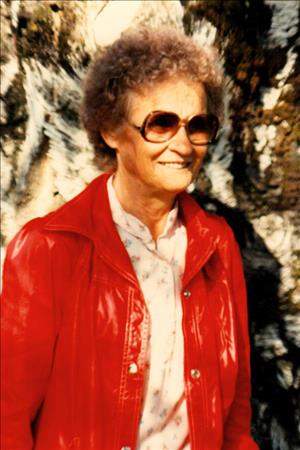 Annie Olson, age 98, died March 28, 2016 at Fair Meadow Nursing Home in Fertile, MN. Annie Cerkowniak was born April 21, 1917 at Caribou, MN. to parents William and Lena (Domenko) Cerkowniak. Her parents had emigrated from Ukraine in the early 1900's. She attended school at Caribou and then worked as a domestic on the Axel Norland farm. On October 17, 1936 she was united in marriage to Nels Olson of Wampum Mb, Canada. While living there, they did logging and farming. In 1944 they moved to a farm by Wannaska, MN. and in 1948 they purchased a farm by Newfolden, Minn.

In 1954, Annie was baptized as one of Jehovah's Witnesses and was active in Congregations in Gatzke, Karlstad and Thief River Falls. In 1972 they retired and moved to Thief River Falls. While there Annie did house cleaning for several parties. Nels died in 1984. In 2005 Annie suffered a stroke and became a resident of Fair Meadow Nursing Home at Fertile. Annie is survived by two sons, Glen and wife Jackie of Deltona, FL, Vernon and wife, Marsha of Fertile, MN; four grandchildren, Rose and Michael Olson, Larissa Borchert, and Mark Olson and three great-grandchildren, Hannah, Victoria and Makenna. Also surviving are sisters, Mary Warniuk, Sadie Kushinski, Helen Keunzi, and Jennie Kowaliuk, and sisters-in-law, Marilyn Cerkowniak, Marion Cerkowniak, Rose Cerkowniak and Mary Olson.

She was preceded in death by her husband, four brothers, three sisters, and a infant grandson. Memorial services will be 2 p.m. Saturday, April 2, 2016 at the Stenshoel-Houske Funeral and Cremation Service, Crookston, MN. The family will be greeting friends one hour prior to the memorial service. Family will greet friends one hour prior to the service

To order memorial trees or send flowers to the family in memory of Annie Olson, please visit our flower store.