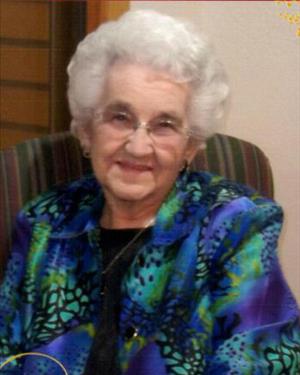 Annetta Klein Raymond, 91, of Crookston, MN, died Wednesday, July 27, 2016, in the Villa St. Vincent at Crookston, with members of her family at her side. Annetta was born in Eureka, SD on October 4, 1924 to David and Rosina (Hoffman) Klein. At the age of 3 she moved with her family to Red Lake Falls, MN. They later moved to Fisher, MN and Annetta graduated from Fisher High School in 1943. After working for the FBI for two years she was united in marriage to Stanley Lloyd Raymond on January 27, 1945 in the Trinity Lutheran Church at Crookston. Five children were born to their union: JoAnn, Janette, David, Judy, and Dean. Stanley passed away in 1993. Through the years Annetta was employed at Miller's Fairway Foods, Bethesda Hospital, and for twelve years in the office of Proulx Refrigeration and Heating, before her retirement in 1989. In retirement she was a Senior Companion for Tri-Valley, and it meant so much to her to be of assistance to others in this capacity for over 20 years. Annetta enjoyed visiting with her many friends, but especially loved being the center of family gatherings with her kids and their families. Annetta is survived by 4 children: JoAnn (Robert) Jeska of East Grand Forks, MN, Janette Kirckof of Fargo, ND, David Raymond of East Grand Forks, and Judy (Darren) Mattila of Superior, WI; 11 grandchildren: Laura (Troy) Hammergren, Leann (Dan) Kawlewski, Lennis (Trish) Fuller, Lance Fuller, Lacia (Josh) Hanson, Jeff Bean, Julie Bean, Jennifer (David) Leonardi, Tessie (Chris) Schatz, Shane (Emily) Raymond, and Dean Salem; 24 great-grandchildren: 2 great-great grandchildren; and many nieces, nephews, and other relatives. In addition to her husband, Stanley, she was preceded in death by her son, Dean, who died in 1969; grandson, Derek Salem, who died in 2012; her parents, David and Rosina Klein; a sister, Elsie Belker; and 7 brothers: Werner, Arthur, Eugene, Jimmy, Lenhart, Edwin, and Hubert. May God bless Annetta's memory. The memorial service for Annetta Klein Raymond will be held at 2:00pm, Monday, August 1, 2016, in St. Paul's Lutheran Church, Crookston, with The Rev. Bill Reck and The Rev. Jo Gast, officiating. Visitation will be at the church for one hour prior to the service. Inurnment will be in the Oakdale Cemetery, Crookston. www.stenshoelhouske.com

To order memorial trees or send flowers to the family in memory of Annetta Raymond, please visit our flower store.