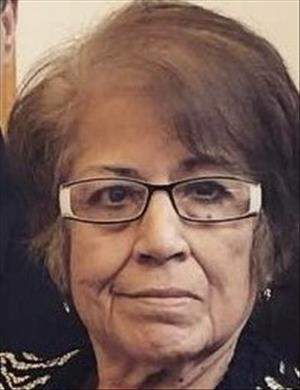 Anita Yanez Gayton, 73, of Crookston, MN, passed away early Friday morning, February 24, 2017, at her granddaughter's residence in Fargo, ND. Anita had been valiantly battling cancer for the past several months.

She was born at Palacios, TX on July 11, 1943, one of 6 children of the union of Fabian and Luisa (Rodriguez) Yanez. Anita was baptized and confirmed in the Catholic faith and moved with her family to Nielsville, MN in 1959. After attending Climax High School, and later earning her GED, Anita was united in marriage to Edward Gayton at Houston, TX in 1970. The couple first lived in Grand Forks, ND for a short time before returning to Houston. In the late 1970's Anita and her 3 children: Charles, Susanne, and Lori moved to Nielsville, and for many years she was employed by her father in his local business known as Fabian's Tavern. She also worked for Spokely Farms helping with the potato harvest and processing. Anita later moved to Fargo, ND and for 10 years was a CNA for the Fraser Limited Group Home. Several years ago Anita came to Crookston and became a caregiver with Eagle's Nest Group Home for 18 years, and then for REM, where she was worked until just 6 weeks before her passing. Anita enjoyed playing bingo, visiting area casinos, and going thrift store shopping. Her greatest joy in life was being with her kids, grandkids, and their families, and they are comforted knowing that she has been reunited with her beloved parents, brothers, and sister.

Anita is survived by her 3 children: Charles (Tammy) Yanez of Hope, ND, Susanne Gayton of Crookston, MN, and Lori Zaleski of Fargo, ND; 13 grandchildren; 13 great-grandchildren; sister, Dora Yanez of Tacoma, WA; brother, Fabian (Sandra) Yanez of Campbell, MN; and many nieces, nephews, cousins, and other relatives. She was preceded in death by her parents, Fabian and Luisa Yanez; brothers, Jesse and Robert Yanez; and sister, Hope DeLa Garza. Blessed be the memory of Anita Gayton.

A memorial service for Anita Yanez Gayton will be held at 2PM, Wednesday, April 19, 2017, at the Stenshoel-Houske Funeral Home in Crookston. Visitation with the family will be for one hour prior to the service. Inurnment will be in the Calvary Cemetery, Crookston.

Visitation with the family will be for one hour prior to the service.

To order memorial trees or send flowers to the family in memory of Anita Gayton, please visit our flower store.