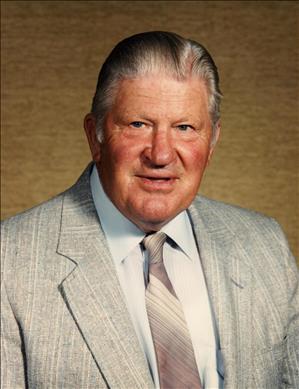 Allen Robert Pedersen, 101, of Crookston, MN, passed away peacefully at Altru Hospital in Grand Forks, ND, on July 13th, 2017. Allen was born on May 22, 1916 at his parents' farm in Marsh Township, near Valley City, ND, the son of Fred A. and Eliza "Lizzie" (Fagerstrom) Pedersen. He was baptized and confirmed in the Lutheran faith, grew up on the farm, and graduated from Valley City High School. Allen went on to attend Valley City State College where he played football and earned a Bachelor of Science in Education. He later completed 2 years of work on his Masters. Allen's first teaching position was at Zeeland (ND) High School where he was also the boy's head basketball coach. He met a young lady by the name of Freda Louise Mellin, who was a fellow teacher and just happened to be the girl's head basketball coach. They were united in marriage on July 30, 1937. With the start of WW II, Allen went into the U.S. Army on August 20, 1942, and served overseas in the European and Pacific Theaters of Operations. He spent time during his tour of duty in Europe, Africa, the Middle East, and Philippines in the Pacific. For his service to his country, our grateful nation awarded Allen the WWII Victory Medal with 5 stars, the Philippine Liberation Ribbon, the European, African, and Middle Eastern Theater Ribbons, a Meritorious Unit Citation, Marksman's Badge, and Good Conduct Medal. Allen and Freda lived in Valley City after WW II until moving to Crookston in 1948, where Allen became the District Manager for the J.I. Case Company. In 1956, he was transferred and the couple moved to Aberdeen, SD. They returned to Crookston in 1971 and Allen became the business manager for Glenmore, a regional addiction counseling and treatment center. Sadly, Freda passed away on April 9, 2012, just 3 short months before they would have celebrated their 75th wedding anniversary. Allen's record of service to others was well recognized: He was a devoted member of Trinity Lutheran Church, a Volunteer for the American Cancer Society, a member of the Crookston Rotary Club for over 57 years, a member of the Mason's, Shriners, American Legion, VFW, DAV, TRIAD, RSVP, Golden Link, Eagles, Elks, Chamber of Commerce, and had served on the City Council. On September 17, 2016, Valley City State College dedicated a Gazebo on the front lawn of the College and honored Allen for his large part in making it possible. Additionally, Allen and Freda contributed to a perpetual vegetable garden at the U of M, Crookston, with funds for aspiring interns at "The Garden". Allen was a life-long hunter, outdoorsman and master gardener. He loved sharing with others and to serve others especially his friends and dear family.

The funeral service for Allen Robert Pedersen will be held at 11:00 AM, Monday, July 17, 2017, at Trinity Lutheran Church, Crookston, MN, with The Rev. Greg Isaacson, officiating. Visitation will be for one hour prior to the funeral. Military Honors will be provided by the Crookston Veterans Council. A graveside service will be held at 3:30 PM Monday, July 17th, at the Memory Garden Cemetery, near Valley City, ND with The Rev. Bradly Edin, officiating.

To order memorial trees or send flowers to the family in memory of Allen Pedersen, please visit our flower store.