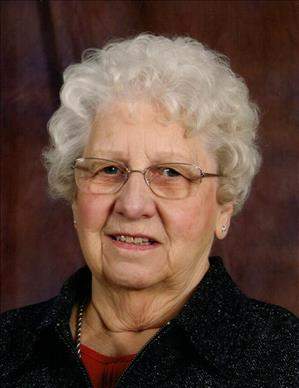 Agnes Irene Cowell Johnstone, 94, of Ada, MN, passed away peacefully early Monday morning, May 8, 2017, at the Benedictine Living Community of Ada. Agnes had been a resident there since August 24, 2016.

Prior to living in Ada, Agnes had spent 11 years as a resident of The Summit Assisted Living, in Crookston, MN. Agnes was born at Eldred, MN near Crookston, on October 16, 1922, the daughter of Gerrit and Clara (DeYoung) Brolsma. Agnes grew up near Eldred and Beltrami on the farm; she received her early education in the country schools near Eldred and Beltrami; and later earned her GED from Crookston's Central High School. As a young woman she was employed as a housekeeper for farm families in the Crookston area. In 1941, at the age of 19, Agnes went to Oakland, CA to work as an electric welder at Moore Shipyards, on many of the naval warships being built in support of the war effort. In 1945 she returned to Crookston and worked as a telephone operator for Northwestern Bell. On June 1, 1946 Agnes was united in marriage to John Cowell. The couple made their home east of Crookston, near the Red Lake River, where they raised their family. After the children were in school Agnes worked for Jiffy Fry of Crookston from 1958-1972. John passed away on June 21, 1971. On June 8, 1974 Agnes married Sheldon Johnstone of Browerville, MN. In 1977 they moved from rural Browerville to a home on Lower Hay Lake near Pine River, MN, and in 1992 they moved to Pokegema Lake near Grand Rapids, MN. They settled in Crookston in 2003, and Sheldon passed away on August 19, 2009.

Agnes was a member of the First Presbyterian Church in Crookston where she taught Sunday School and sang in the choir for many years. One of Agnes' passions was making things grow; be it vegetables, strawberries, or the beautiful flowers she raised wherever she lived. Agnes' biggest joy was her family. She entertained her grandchildren with many favorite lake activities, and always made sure to have her favorite treats for her family, whenever they came to visit.

The funeral service for Agnes Cowell Johnstone will be held at 2:00pm, Sunday, May 14, 2017, at the Stenshoel-Houske Funeral Home in Crookston with Pastor Karen Finnegan of Faith United Church, Ada, MN, officiating. Visitation will be for one hour prior to the funeral. Interment will follow the service in the Oakdale Cemetery, Crookston. Online registry: www.stenshoelhouske.com

To order memorial trees or send flowers to the family in memory of Agnes Johnstone, please visit our flower store.