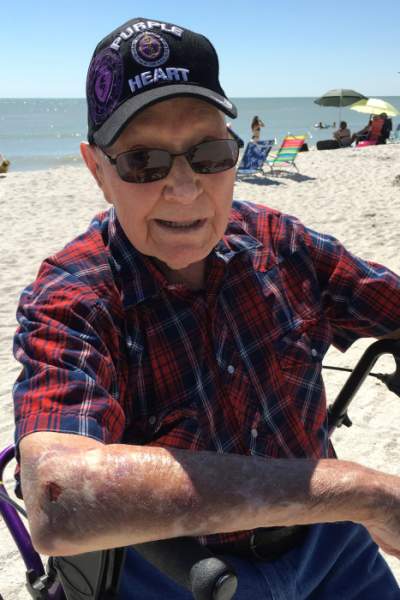 February 26th, 2019, Lloyd Ray Dawley of Owatonna, MN was called home to be with his beloved wife of 56 years, and it marked the end of a centennial’s journey on this earth. He was born January 26th, 1918 in Decatur, IL to Ray Mercell Dawley and Anna Rachael Livingston. He completed an 8th grade education (in seven years!). He served in World War II for the United State Army as a Frontline Tank Mechanic from November 1942 to January 1946.

He met Betty Shirley Larson on furlough from the war while riding on a train. He knew she was ‘the one’ instantly, and they wed on April 5th, 1947 in Eveleth, MN. They moved to Baudette, MN where they raised their family. Their love endured immeasurable loss of three children and many tough years of farming. Lloyd loved Betty the way storybooks describe love. She was on a pedestal to him. They never said an unkind word about each other and made an incredible team sustaining a dairy and grain farm and raising their children. Lloyd made ends meet by also doing jobs as a Custom Farmer and doing Right of Way Clearing.

He saw the worst that humanity had to offer serving in World War II, but he still managed to see the best in people. He had a hard hand dealt to him coming of age in the Great Depression, but he allowed his hands to work harder than the hand he was dealt. Lloyd worked very hard!  He earned everything he ever had. At 80 years of age, he guiltily purchased a four-wheeler (just to have for fun), and it was the first item he ever purchased that was not a need and did not serve to help make an income.

Lloyd worked hard, and he also loved hard. He adored his family. Even when times were tough, he made things special. Not always a man of many words, he could always be counted on for a bit of humor. In more recent years, he enjoyed his time travelling to many countries and annual trips to Sanibel Island, Florida. He loved spending time with his family and would often tell strangers (and his favorite nurses and caregivers) that “he has the most beautiful grandchildren and great-grandchildren in the world.”

He is now reunited with his (beloved wife) Betty Dawley, (his daughters) Laurel and Lois Dawley and (his son) Raymond Dawley, his (mother and father) Anna and Ray Dawley, several siblings: Erma, AnnaMay, Newton, and Linnley.

Lloyd Ray Dawley will be remembered for many things; his work ethic, his love of farming and the outdoors, his desire to live, his perseverance, his determination, his humor, and his kind-heartedness.

To order memorial trees or send flowers to the family in memory of Lloyd Dawley, please visit our flower store.